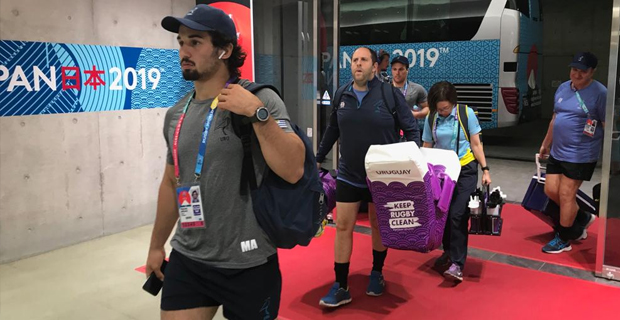 “We came to the Rugby World Cup to shock the world”

That's the word from Uruguay's Assistant Coach Joaquim Pastore ahead of their Rugby World Cup match against the Wallabies this afternoon.

He says they want to show the rest of the world their rugby has developed enough to be competitive against teams such as Australia and Wales.

Pastore told Fox Sports that losing to Georgia they have to rediscover the height of this team.

Australia needs to lose to Uruguay without a bonus point for Fiji to still have a chance of reaching the quarterfinals of the 2019 Rugby World Cup.

Fiji will then need to claim a bonus-point win over Wales next Wednesday.

If the Wallabies lose to Uruguay without a bonus point today they do not get any points and remain in third place with 6 points in Pool D. Fiji is currently second in Pool D with 7 points.

Based on this, the Flying Fijians will have a high chance of finishing second in Pool D with 12 points if they beat Wales with a bonus point next Wednesday.

In this scenario, Fiji will still finish second in Pool D even if Australia beats Georgia with a bonus point because the Wallabies will only finish with 11 points while Fiji will finish with 12 points.

Australia will face Uruguay at 5.15pm while England will face Argentina at 8 o'clock tonight.

Speaker of Parliament Ratu Epeli Nailatikau has informed parliament this evening that the Social Democratic Liberal Party (in suspension) or any of ... 9 hours ago