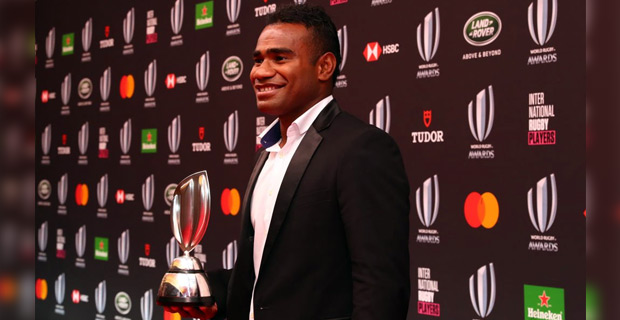 Congratulations to @fijirugby sensation Jerry Tuwai, who has won the World Rugby Men’s Sevens Player of the Year Award in in association with @HSBC_Sport #WorldRugbyAwards pic.twitter.com/9dOtoM74Rj

For the past two years, Tuwai had lost to USA's Perry Baker. He dedicated the award to his family, his fellow players and fans across the country.

Jerry Tuwai accepts his World Rugby Men’s Sevens Player of the Year Award in in association with @HSBC_Sport #WorldRugbyAwards pic.twitter.com/cDHSYyZVUh

Samisoni Viriviri was the first Fiji 7s player to receive the award.

A special moment for a special player. Congrats to @JerryTuwai, he’s your World Rugby Men’s Sevens Player of the Year 2019 in association with @hsbc_sport #WorldRugbyAwards pic.twitter.com/VBVlItIqyy

The Springboks who are the Rugby World Cup champions received the World Rugby Team of the Year Award.

South Africa's coach Rassie Erasmus is the World Rugby Coach of the Year.

All Blacks halfback TJ Perenara picked up the International Rugby Players Try of the Year Award for his incredible score against Namibia at the Rugby World Cup.

Wayne Barnes was awarded the World Rugby Referee of the Year Award.

Legendary All Blacks Captain Richie McCaw and Coach Graham Henry were also inducted in the World Rugby Hall of Fame.