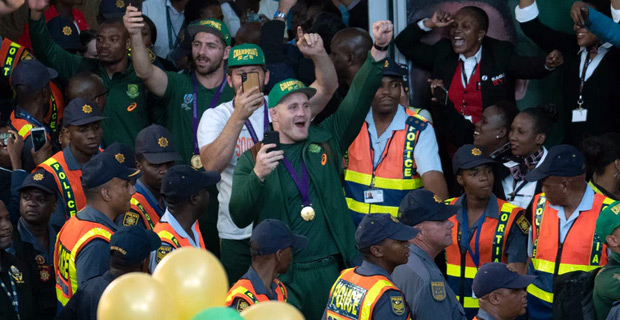 Makazole Mapimpi and Cheslin Kolbe, who scored the Springboks' tries in Saturday's final against England, were among the first group of players to land at OR Tambo Airport.

Beautiful scenes! Happy to be a part of this to welcome the boys home. @Springboks 🇿🇦🇿🇦🇿🇦 #SpringbokChampions 🏆#SpringboksArrival #StrongerTogether 💪🏾 pic.twitter.com/K9RJvAOcsA

TVNZ News reports as he emerged into view in the arrivals hall, Mapimpi held his hands up and clasped them together as the crowd roared.

Kolbe was recording the scenes on his cellphone.

Teammate Damien de Allende, with his gold medal draped round his neck, pumped his arms in the air in front of the fans wearing Springboks jerseys who packed the hall.

Amazing scenes in South Africa as the @Springboks return home with the @rugbyworldcup! Spine tingling! pic.twitter.com/qkKAv3eFK2

Duane Vermeulen, the player of the match in the final, dished out high fives to fans.

People were also crammed together on the balconies overlooking the arrivals area — there was no room to move anywhere — and a giant South African flag hung on one wall.

The smiling players had to be shepherded through the crowd by a police escort.