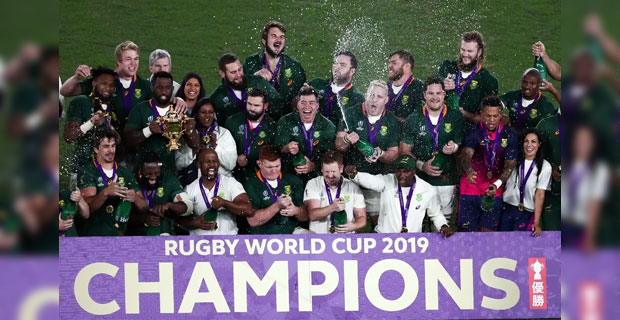 South Africa have won the Rugby World Cup after beating England 32-12 in the final.

Makazole Mapimpi and Cheslin Kolbe scored the tries for the Springboks in the match.

It was an impressive performance from the Springboks who started the tournament with a loss against the All Blacks.

This is the Springboks third Rugby World Cup title as they also won in 1995 and 2007.

SOUTH AFRICA ARE CHAMPIONS OF THE WORLD

This is also the first time a team has won the Rugby World Cup after losing one of their group matches.

Pure joy for the @Springboks as they become the first team to win a Rugby World Cup after losing a match in the pool stages#ENGvRSA #RWC2019 #RWCFinal pic.twitter.com/tjORyicbCQ

He also talked about winning the title in front of his father who travelled overseas for the first time to watch Kolisi play.

They have equaled the record of the All Blacks who have also won three Rugby World Cup titles.