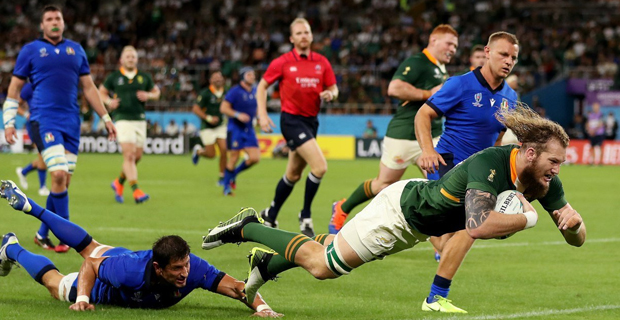 South Africa have kept their Rugby World Cup hopes alive with a 49-3 bonus-point win over Italy who had prop Andrea Lovotti sent off for a tip-tackle.

Handre Pollard converted tries from Cheslin Kolbe and Mbongeni Mbonambi and added a penalty to put the Springboks 17-3 up at the break.

After Lovotti was dismissed, Kolbe crossed for his second score.

Lukhanyo Am, Makazole Mapimpi, RG Snyman and Malcolm Marx also went over as South Africa went top of Pool B.

The game was over as a contest once Lovotti was dismissed by referee Wayne Barnes early in the second half for his part in picking up Springboks number eight Duane Vermeulen and dropping him headfirst to the ground.

It was the fourth red card already of this Rugby World Cup - the joint most ever in a single World Cup alongside 1995 and 1999 - while there was only one in 2015.

Two-time winners South Africa know victory in their final pool match against Canada is likely to be enough to secure a quarter-final berth.