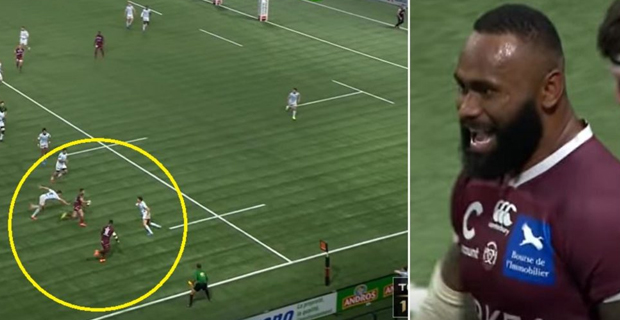 Flying Fijian Semi Radradra could not be stopped as he ran through Racing 92’s cover defence to score twice for his club Bordeaux in their 32-3 win in the Top 14 competition.

Radradra is expected to leave Bordeaux by the end of this Top 14 season and take up a 3-year contract with the Bristol Bears.

The 27-year-old played for Fiji in the Rugby World Cup, lighting up the competition pool stages with a string of sensational displays, including a brace of tries against Georgia.

During his time in the Australian National Rugby League, Radradra was named Dally M winger of the year for two seasons in a row, scoring 82 tries in 94 games for the Parramatta Eels.

Virimi Vakatawa scored twice for Racing 92 as they are still trying to cope with the suspension lock, Leone Nakarawa.

A 37-year-old man who is alleged to have raped, assaulted and robbed a 58-year-old woman in a settlement in Suva has pleaded not guilty to all his ... 36 minutes ago

A 36-year-old man from Samabula who was allegedly found with two bags of methamphetamine and five bullets of marijuana has been remanded in custody ... 40 minutes ago

Former Lawyer Shazran Abdul Lateef and Zoe Maharaj Moore who are charged with drug-related offences will take their plea on the 22nd of this ... 43 minutes ago

Police and the Land Transport Authority of Fiji are searching for a suspect of a hit and run incident which caused the death of a man in Saweni, ... 49 minutes ago