PM to re-open the Vodafone Arena this Friday

PM to re-open the Vodafone Arena this Friday 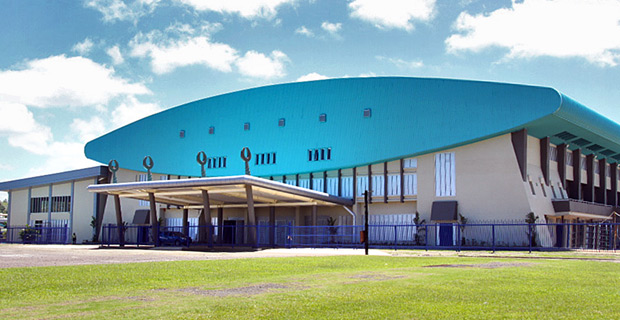 The Vodafone Arena will be re-opened this Friday by Prime Minister Voreqe Bainimarama.

The extension is comprised of one full-sized netball court of 907 square metres, on the side nearest the Damodar City Aquatic Centre, and a 571 square metre court, on the ticket booth side of the Vodafone Arena.

This adds another 1,478 square meters to the original 2,042 square metre Vodafone Arena.

As well as the permanent seating for 2,350 patrons, new retractable bleachers cater for an additional 834 spectators and additional seating area for more than 3000 people with the original and extended floor area combined.

The arena has new sound and ventilation systems compliant with seismic and fire requirements.

Fiji Sports Council CEO, Litiana Loabuka says in order to continue to provide sporting facilities that are of world-class standard, they need to ensure a consistent maintenance process is in place and people should adhere to its usage policies.

Loabuka says with the new extension comes the responsibility of maintaining it as well.

She says to ensure the longevity of the Sports Council’s properties, we have a property management team she adds they spend about $350,000 a quarter on maintenance, which is a considerable amount, but it is still a long way from the 10% of the asset value that should actually be spent on maintenance.

The new Vodafone Arena will now be available for regional and international competitions such as the Oceania Championships, which featured futsal, volleyball, weightlifting, taekwondo and basketball.

Loabuka stated the re-opening of the Vodafone Arean will be celebrated with games of netball and volleyball as arranged by respective clubs and also an Under 12 Basketball competition that is organized by the national sporting organisation Basketball Fiji.

The Vodafone Arena was first built in 2003 and gifted to Fiji by the People’s Republic of China. The renovation and extension of the Fiji Sports Council Vodafone Arena began in February 2018