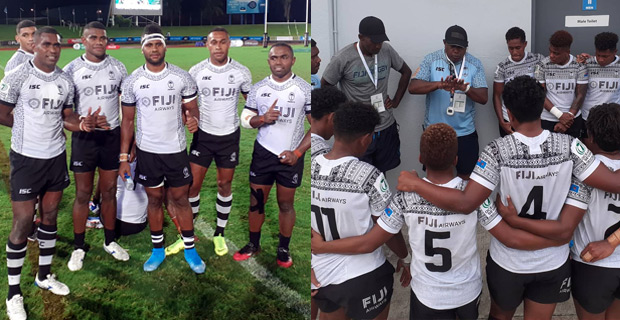 Fiji 7s Team and the Fijiana

Only the winners of the men's and women's competition in the Oceania Sevens will gain direct qualification for the Tokyo Olympics next year.

The second and third-placed teams from each section will then compete in the World Rugby Global Repechage Competition in June 2020 which is the final opportunity for Olympic qualification.

Fiji Airways Fijiana Coach Saiasi Fuli says qualification for the Olympics for the first time is their only aim from the tournament and they will treat every game as a final.

The Fijiana have now won two games in the Oceania Sevens after thrashing Solomon Islands 75-0 in their second pool match.

The side started their tournament with a comprehensive 48-0 win over Vanuatu yesterday.

Meanwhile, the Fiji Airways Men's National Side who have already booked their place for the Tokyo Olympics will take on New Caledonia at 3.02pm today before taking on New Zealand in their last pool match at 7.26 tonight.

Tourism Fiji’s Chief Executive Officer, Matthew Stoeckel has confirmed that they have progressed into Stage Two of their Market Re-entry Plan follow... 7 hours ago
LATEST NEWS