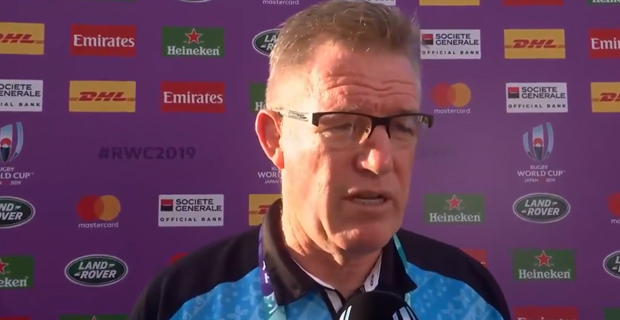 Fiji Airways Flying Fijians coach John McKee admits it is going to be challenging for them to progress from the pool stages after Uruguay pulled off a historic victory over Fiji yesterday.

The Rugby World Cup site reports McKee saying they are relying a lot on other points now and they just have to focus on their match against Georgia next Thursday.

McKee says they knew the short turnaround was going to be tricky.

The Flying Fijians still has a mathematical chance to qualify for the Rugby World Cup quarter final despite a hopeless performance against Uruguay yesterday.

This will be based on other results going our way.

Fiji has to thrash Georgia by 50 or more points and we have to beat Wales. For Fiji to qualify, Australia has to beat Wales by 21 points or more and Wales win margins has to be less than 10 points.

If this happens then Fiji is likely to face England in the Rugby World Cup quarter final.

England is likely to top their pool and will meet either Wales, Australia or Fiji in the quarters - depending on how results go in the remaining rounds.

Defending champions, New Zealand will either meet Japan, Scotland or Samoa in the second quarter final.

Australia or Wales will take on France or Argentina in the third quarter final.

Ireland is likely to meet South Africa in the last quarter final.

Barring any upsets, the All Blacks will meet England in the first semi final on Saturday 26th October.

Australia or Wales will meet South Africa in the second semi final on Diwali night on Sunday 27th October.

The World Cup Final will kick off at 9pm Saturday November 2nd.

Many people are predicting the All Blacks to meet the Springboks in the final. However England, Australia, Wales, France, Ireland and Argentina could spring a few surprises that may result in a change in scenario on the road to the final.