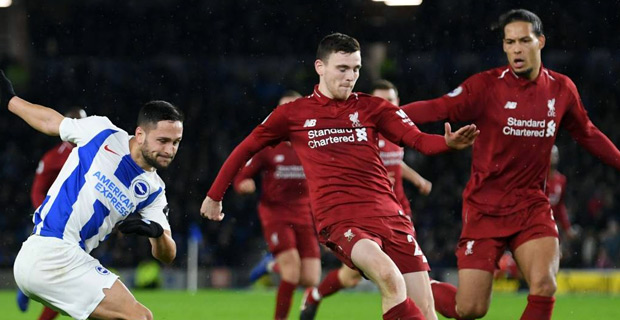 Florin Andone of Brighton shoots while challenged by Andy Robertson of Liverpool during the Premier League match. [Photo:TVNZ]

Liverpool has extended its lead at the top of the English Premier League points table to eleven points after beating Brighton 2-1 this morning.

Defender Virgil Van Dijk scored twice for the reds as goalkeeper Allison was shown a red card for handling the ball outside the box.

The win came after Manchester City were held 2-2 by Newcastle United.

Goals by Raheem Sterling and Kevin De Bruyn had given the city a 2-1 lead before former Liverpool midfielder Jonjo Shelvey equalized for Newcastle late in the match.

The result sees City remain second on the EPL points table with 29 points, 11 behind Liverpool who is on 40.

In other games, Tottenham continued their revival under new manager Jose Mourinho with a 3-2 win over Bournemouth, West Ham stunned Chelsea 1-0 while Crystal Palace beat Burnley 2-0.

Manchester United will play Aston Villa at 5.30am tomorrow.

Fiji’s seasoned diplomat and former Minister for Foreign Affairs, Ratu Inoke Kubuabola has been nominated as Fiji’s candidate for the position of ... 19 minutes ago