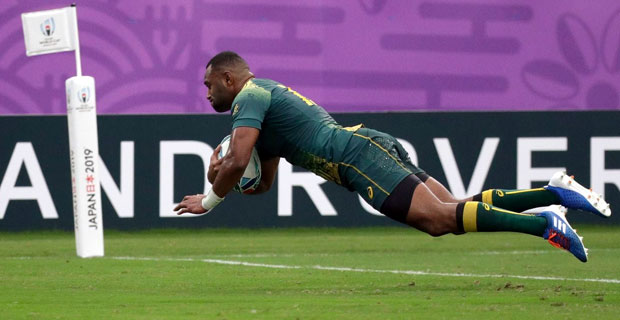 Tevita Kuridrani scored two tries for the Wallabies who are now on track for a Rugby World Cup quarterfinal berth after a 45-10 win over Uruguay in Oita last night.

Australia’s win was their second of the tournament, putting them on top of their pool for now with Wales and Fiji yet to play, and on track for a top-two spot when the dust settles next week.

Full-time | After an impressive display it's @wallabies who come away with the win, beating Uruguay by 35 points #AUSvURU #RWC2019 pic.twitter.com/aVbjlX9Nu2

The clash shaped as a chance for the Wallabies to make an emphatic statement about their World Cup credentials but they certainly didn’t do that from the outset.

Rugby.com.au reports Australia held a 16-point lead by the half-hour mark but also had to play for 20 minutes with just 14 men after two yellow cards for high tackles.

By the 35th minute, the Wallabies led the penalty count 8-4, with inaccurate tackling costing them in the discipline stakes, in a tournament that has been marked by a crackdown on high tackles.

Despite that ill-discipline, the Wallabies were well and truly on top for much of the half and that dominance continued in the second as they piled on 26 points in the final 40.

Rookie centre Jordan Petaia put a year of false well and truly behind him, looking right at home in his first half of international rugby, replaced at the break.

Jordan Petaia is officially the youngest ever @wallabies player to score at a Rugby World Cup. #RWC2019 #AUSvURU pic.twitter.com/y29M8fbMj7

The Queensland back had a try in the 25th minute and helped set up another for Tevita Kuridrani six minutes later in some exciting signs for the future.

Kuridrani had a double for the Wallabies in a strong performance from the outside centre, who has slipped down the pecking order this season.

The Wallabies dominated early and used their strength in their forwards to build some pressure on the Teros.

Dane Haylett-Petty had the first try in the sixth minute after a helter skelter passage of play that saw the ball bounce of Uruguayan defenders and back over the heads of the Wallabies before they cleaned up that mess.

A quick switch gave the Wallabies an overlap and Lurtley Beale threw the last pass for Haylett-Petty to go over.

It happens to backs too...

Toomua saw the funny side of it.#AUSvURU #RWC2019

The early stages certainly didn’t go all the Wallabies way, though, with Uruguay mounting a spirited attack on Australia’s line.

A penalty from a lineout gave Uruguay a five-metre scrum and they peppered the Australian line before a high tackle gave the South Americans the chance to notch their first points.

Australia was left a man down in the 14th minute when lock Adam Coleman was yellow-carded for a high tackle, collecting a Uruguayan opponent above the shoulder.

The Wallabies looked to have scored again when Michael Hooper rolled over the line but with no clear grounding, Australia went to a five-metre scrum instead.

"We're very proud to wear it here on the world stage"@wallabies captain Michael Hooper speaks on the importance of the special indigineous jersey worn by his team against Uruguay #AUSvURU #RWC2019 pic.twitter.com/KEpgNz5Mep

Petaia scored his first career try in the 24th minute, spinning out of a tackle to score and give the Wallabies somewhat of a settler as Coleman returned to the field.

Australia were at their full complement for just four minutes before another yellow card was handed out for repeated high tackles, this time to Lukhan Salakaia-Loto.

Tevita Kuridrani added to the Wallabies’ scoreline, finishing off a slick attacking move by Australia that went through multiple sets of hands before a petaia step put Kuridrani through a hole to score.

🖐 GET OFF ME! What a fend from @wallabies outside centre Tevita Kuridrani #AUSvURU #RWC2019

Uruguay looked to have scored their first try in the 40th minute but Tomas Inciarte was ruled offside.

Taniela Tupou replaced Allan Alaalatoa at half-time and instantly made an impact in open play, crashing through the Uruguayan defence.

It was Kuridrani who scored first in the second half, bursting through a defensive hole and finding the line for his second.

Replacement halfback Will Genia added another, finishing off an opportunity created through some spectacular Jack Dempsey footwork and the Wallabies’ confidence began to rise after that.

The celebrations were raised a notch when loosehead James Slipper crossed the line, for his first Test try in his 94th Australian appearance.

Haylett-Petty scored his second in the 69th minute to stretch the margin out to 42 points and the Wallabies were heading into cruise control territory as Uruguay began to tire.

The Uruguayans weren't quite done yet, though, with Manuel Diana getting the side's first try in the 78th minute after heaping pressure on the Australian line.

Australia has just one pool match left to play, against Georgia next Friday in Shizuoka, while Wales will take on Fiji in Oita on Wednesday before facing Uruguay next weekend.