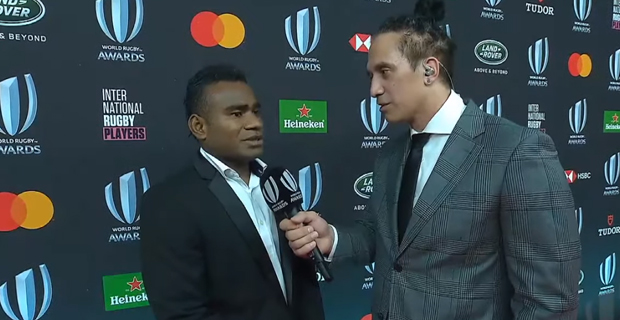 World Rugby 7s Player of the Year, Jerry Tuwai says he cannot comment about next year's Tokyo Olympics as the team is focusing on the Dubai and Cape Town 7s.

Tuwai made these comments after winning the World Rugby 7s Player of the Year Award last night.

Jerry Tuwai accepts his World Rugby Men’s Sevens Player of the Year Award in in association with @HSBC_Sport #WorldRugbyAwards pic.twitter.com/cDHSYyZVUh

Fiji is the defending champion of the Men's 7s event at the Olympics.

Tuwai says it has been a long journey for him and the award means the world to him, his family and Fiji.

Congratulations to @fijirugby sensation Jerry Tuwai, who has won the World Rugby Men’s Sevens Player of the Year Award in in association with @HSBC_Sport #WorldRugbyAwards pic.twitter.com/9dOtoM74Rj

He becomes only the second Fiji 7s player to win this award after Samisoni Viriviri.

Meanwhile, the Fiji 7s team will be taking part in the Oceania 7s from Thursday.

Fiji will play Niue at 1.34pm Thursday, their second game is against Japan SDS at 7.26pm Thursday, Fiji plays New Caledonia at 3.02pm on Friday before playing the final pool game against New Zealand at 7.26pm Friday.