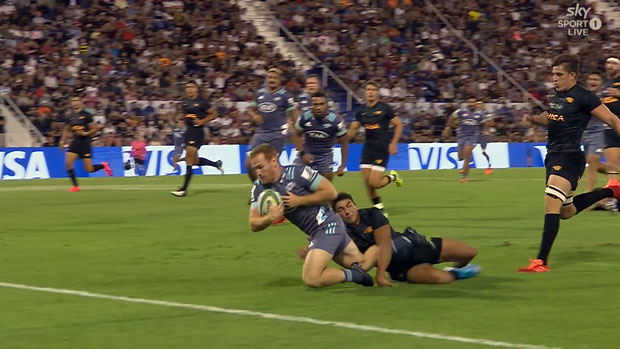 The Hurricanes have survived a scare to record their first win of 2020, snatching a 26-23 win over the Jaguares in Buenos Aires.

After falling to a 27-0 defeat away to the Stormers last week, the Hurricanes headed to Argentina looking to avoid back-to-back defeats under new coach Jason Holland.

The Jaguares meanwhile opened their season with an impressive 38-8 demolition job over the Lions.

TVNZ News reports the home side scored the only try of the first half, Marcos Kremer crossing over for the Jaguares.

Three penalties from Jordie Barrett kept the Hurricanes in the contest though, trailing 10-9 at the break.

Two second half penalties from Dominigo Miotti saw the Jaguares extend their lead to 16-9, before a try to Augustin Creevy effectively sealed the result for the hosts.

Alex Fidow would go over for a late try for the Hurricanes, closing the gap to 23-19 to give the Kiwi side hope of a come-from-behind victory.

😲 An absolute rocket from Jordie Barrett! 63 metres with ease.

In the end, a late burst from Ngani Laumape sent replacement halfback Jamie Booth over for the match-winning try, Fletcher Smith's conversion earning a three-point victory.

The Hurricanes will now head back to New Zealand, where they'll play their first home match of 2020 next week, taking on the Sharks.

In other rounds 2 results, the Sharks defeated the Highlanders 42 20, the Brumbies beat the Rebels 39-26, the Chiefs beat the Crusaders 25-15 the Blues beat the Waratahs 32-12, the Lions defeated the Reds 27-20 while the Stormers beat the Bulls 13-nil.

207 new junior nurses have been posted to the CWM, Lautoka and Labasa hospitals. They are now part of the health system and will be appointed as ... 51 minutes ago