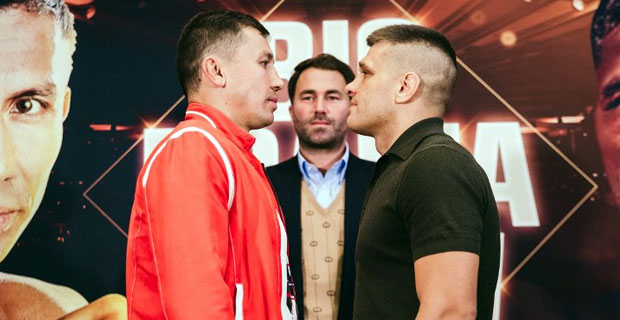 The last time Sergiy Derevyanchenko fought at Madison Square Garden, he left the famed Manhattan venue with what remains the lone loss on his record and without the IBF middleweight title.

Daniel Jacobs, Derevyanchenko’s stablemate and frequent sparring partner, dropped Derevyanchenko in the first round 11 months ago and beat him on two of three scorecards to win a split decision.

That 12-round fight took place in Madison Square Garden’s Hulu Theater, the smaller venue downstairs from the main arena.

Derevyanchenko will take his second shot at that IBF belt, again vacant, when he squares off against Gennadiy Golovkin in the main arena tomorrow.

The Ukrainian contender should at least challenge Golovkin (39-1-1, 35 KOs) more than his previous opponent, Steve Rolls.

Golovkin knocked out the unbeaten, unproven Rolls (19-1, 10 KOs) in the fourth round of their June 8 bout at The Garden.

The former middleweight champion considers Derevyanchenko a top-tier middleweight, a very accomplished amateur motivated to pull off a career-changing upset in a main event DAZN will stream live.

“It will be a different fight – a different opponent, different styles,” Golovkin said. “Also, Derevyanchenko was getting ready for this fight for a very long time.

So, it’ll be a more difficult fight for me as well.”

Just how difficult depends upon not only how much elite-level boxing the 37-year-old Golovkin has left in him.

The 33-year-old Derevyanchenko nears their fight for the IBF and IBO middleweight titles having to prove that he, too, is the same ferocious fighter he was when he entered the ring to box Jacobs last October 27.

There are those involved in this promotion who’ve wondered when the microphones were off if this is a diminished Derevyanchenko.

They think that the Jacobs bout and more than 400 amateur matches have taken too much out of Derevyanchenko, a technically proficient fighter who’s 13-1 as a pro, including 10 knockouts.

They point to Derevyanchenko’s substandard performance in his last fight – a 12-round, unanimous-decision victory over Jack Culcay on April 13 – as evidence that he isn’t the same fighter he was when he battered Tureano Johnson and stopped him in the 12th round of their August 2017 fight.

Of course, Culcay is an awkward veteran against whom it is tough to appear impressive.

Still, Derevyanchenko disappointed even himself in the way he overcame Culcay (26-4, 13 KOs).

“The first half of the fight was going my way,” Derevyanchenko said. “Something changed in the eighth, ninth round. The momentum of the fight started to change, so I had to make some changes. But that’s stuff that I’m working on, to keep that momentum going the whole fight.”

The 2008 Olympian is more confident entering this fight than his loss to Jacobs and his victory over Culcay because his head trainer, Andre Rozier, has worked with him throughout this training camp and will man his corner tomorrow.

Rozier also has been Jacobs’ trainer throughout his career, thus he worked in the opposite corner of Derevyanchenko in that bout. He couldn’t work with Derevyanchenko for the Culcay clash, either, because Rozier was across the country, training Jacobs for his middleweight title unification fight against Canelo Alvarez on May 4.

“I already feel a difference now, just having him in training camp,” Derevyanchenko said. “The team is together.

From when I first came to the United States, it was Andre and [assistant] Gary Stark. That was the team. So, when you take that away, there was a void. Just the fact that he was in camp with me now, it’s already a huge difference for me and a huge advantage for me.”

We’re less than two days away from finding out if that’ll materialize inside the ring. Derevyanchenko’s manager, Keith Connolly, senses a calmness from his fighter that indicates he is prepared to give Golovkin one of the toughest tests of the Kazakh knockout artist’s celebrated career.

“[This is the] biggest opportunity of Sergiy Derevyanchenko’s life,” Connolly said. “And spending the last couple of days with him, I can legitimately say he’s not nervous. He’s as cool as a cucumber and he’s ready for the fight. And you don’t have 410 amateur fights, and win 390 of ‘em, and not have a chance to win the middleweight title against Triple-G tomorrow. He’s a live underdog. I know he’s a 4-1 underdog, but it’s gonna be a close, competitive fight, and he definitely has a chance to pull it out.”

Derevyanchenko lost the Jacobs bout by the same score, 115-112, on the scorecards of judges Tom Schreck and Steve Weisfeld. Judge Julie Lederman scored their 12-rounder for Derevyanchenko, 114-113.

Even after narrowly losing that fight, Derevyanchenko doesn’t feel as though he needs to knock out Golovkin, who’s clearly the ‘A’ side of his promotion, to win tomorrow.

“I can’t think about that,” Derevyanchenko said. “I don’t think I have to knock him out to win. But again, I can’t worry about that. I can only worry about my performance in the ring. Who knows? I may catch him and I may knock him out. But I’m gonna do what I need to do to win the fight. My focus is to win the fight. Whether it’s a knockout or a decision, I just need to win.”

For Rozier, this represents his third chance as a trainer to beat Golovkin. The first two fights resulted in Curtis Stevens’ TKO loss in November 2013 and Jacobs’ close loss by unanimous decision to Golovkin in March 2017.

Both of those fights took place at Madison Square Garden – the Stevens fight at The Theater and the Jacobs bout in the main arena.

“When Danny fought him,” Rozier explained, “it was a close fight, a very close fight, and there were things that [Jacobs] could’ve done that could’ve made it more convincing.

This is what I’m stressing with Sergiy, why we have to make sure that we do everything that we’re working on. And if he does, look out – it’s gonna happen. It’s going to happen.”