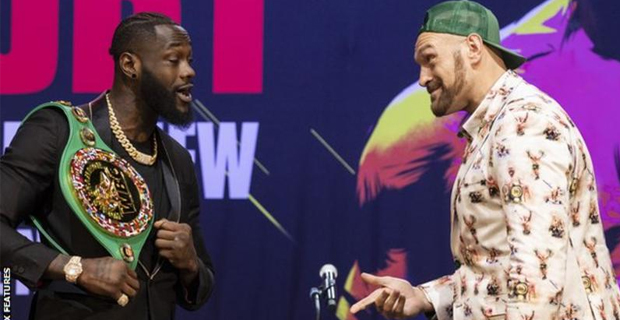 British heavyweight boxer, Tyson Fury says he will never get a judges' decision in his rematch with Deontay Wilder and his desire to knock the American out was one of the reasons he dropped trainer Ben Davison.

Fury,will fight WBC heavyweight title holder Wilder next month in Las Vegas after their 2018 bout in Los Angeles ended in a controversial draw.

Last month, Fury moved from Davison to team up with Javan 'Sugar' Hill.

Fury says he knows he will not get a decision in the US.

In a news conference held in Los Angeles to promote the fight, Fury added, they had to rob a man who had been out of the ring for three years and they still could not beat him.

Fury says he is not going for a points decision, he has had nine of them and he  is going for a knockout.

A 57-year-old labourer who allegedly raped his 4-year-old step-granddaughter in Ba has been charged with three counts of rape and will appear in the B... 56 minutes ago
LATEST NEWS

Ten people were arrested for breaching the nationwide curfew from 10 o’clock last night to 5 o’clock this morning with one suspect possibly ... 8 minutes ago

A Police officer has been charged with Failure to Comply with Orders after allegedly breaching the curfew over the weekend. During the curfew ... 9 minutes ago

Police in the US are struggling to control arson, damage, and looting following the death of George Floyd in Police custody. In the video footage, ... 23 minutes ago

Good progress is now being made by the Nasinu Town Council to clean up the piles of rubbish which has been building up in the Nasinu area in recent ... 43 minutes ago