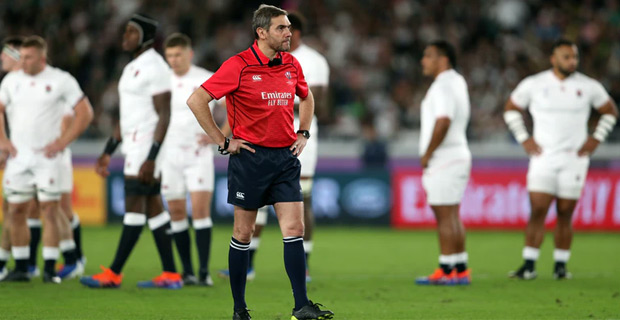 Both fans and players of England’s rugby team have been criticised for how they acted after losing last night’s World Cup final against South Africa.

England came up short for a second time against the Springboks on rugby's biggest stage with a 32-12 loss in Yokohama after entering the match as heavy favourites following their clinical win over the All Blacks the week prior.

After the match, the presentations took place to wrap up the tournament but the actions of some English supporters and players have come under fire.

When referee Jerome Garces went to collect his medal during the ceremony for officiating the match, he was meet by jeers and boos from fans in the crowd for his persistent penalising of the English scrum, which gave away five penalties in the Test.

Former Test referee Jonathan Kaplan was quick to jump to Garces' defence in a column for The Daily Telegraph, slamming the supporters for their actions.

He says Jerome did not have a perfect match - no referee in a World Cup final ever has - but England’s fans should be questioning their own scrum rather than the officials.

SODELPA MP Niko Nawaikula says that the Itaukei Trust Fund Board is not doing enough to take into account the history of the Itaukei culture however ... 1 hour ago