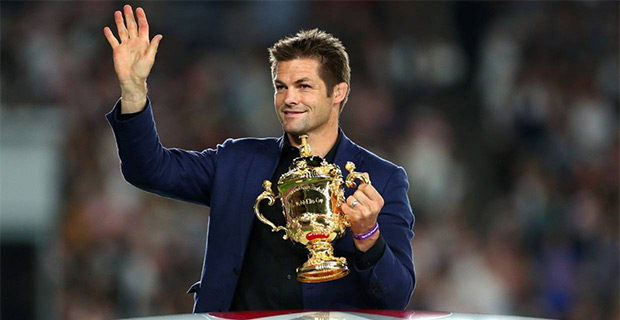 After eight years locked away in the trophy cabinet, former All Blacks captain Richie McCaw returned the Webb Ellis Cup last night to be presented to its new owners, South Africa.

After the final wrapped up, McCaw made his way onto the field alongside Brave Blossoms captain Michael Leitch with the trophy in his hands.

McCaw made his way to the podium while World in Union - the anthem of the Rugby World Cup - began to play, making the moment an emotional one for both New Zealand supporters and fans of the game.

Japan's Crown Prince Akishino soon presented the cup to winning captain Siya Kolisi, who hoisted it high along with a stirring message for fans back home.

Kolisi says they have so many challenges in their country but they all came together from different backgrounds and races to show that they are capable of anything if they work together.