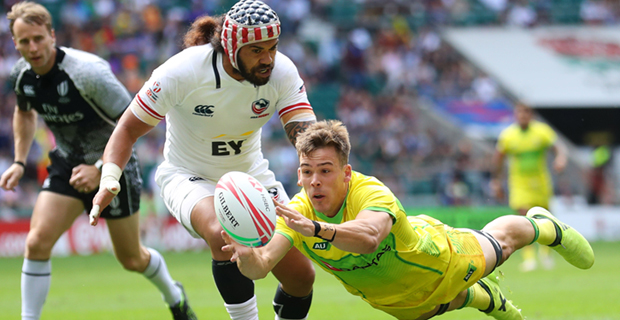 There will be no quarter-finals at Hamilton or Sydney Sevens [Photo: Getty Images]

Australian 7s coach, Tim Walsh has called for consistency in the scheduling of the World Sevens Series tournament as players and coaches prepare the upcoming Hamilton and Sydney 7s tournaments.

For the first time, New Zealand and Australian 7s will see all quarter-finals scrapped where only the winners of the four pools at both events will progress straight into semi-finals.

The radical changes are due to the fact both Hamilton and Sydney Sevens are being squeezed into a two day event.

Walsh told Rugby.Com.Au  the positive thing about this is that the playing field is the same for all teams and they have to be the best to qualify to the semi-finals.

The Australian coach says he understood the need for the evolution of the sport but he believes the lack of consistency in scheduling is “compromising” the traditional essence of sevens, as built over the last four decades.

He adds some tournaments have quarter-finals, some go straight to semi-finals while some are with the women and some are joint and from a supporters point of view there isn’t any consistency there.

Australia is pooled with Fiji, Samoa and Argentina in the Hamilton 7s which will be held on the 25th and 26th of this month.