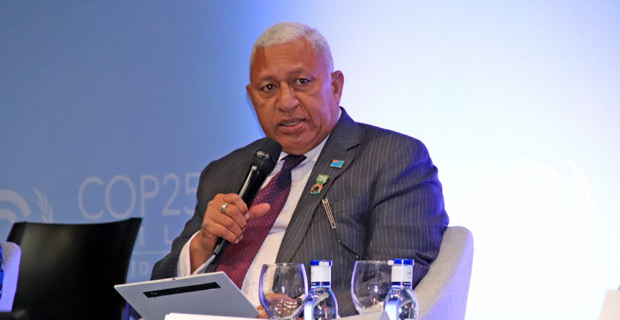 Prime Minister Voreqe Bainimarama says the world must adjust course to avert catastrophe adding for the survival of Pacific Small Island Developing States, and for the world, we must set a stage not of ignorance and denial but of ambition for COP26 and beyond.

Bainimarama made this comment while delivering his national statement on behalf of Pacific Small Island Developing States at the High-Level Segment of the COP 25 in Madrid, Spain yesterday.

He says every nation in the world should recognise that the ocean is vital, and Pacific Small Island Developing States support the proposal to better reflect this reality within the United Nations Framework Convention on Climate Change.

The objective of the United Nations Framework Convention on Climate Change is to stabilise greenhouse gas concentrations in the atmosphere at a level that would prevent dangerous anthropogenic interference with the climate system.

He says as nations on the front lines of devastating cyclones and catastrophic sea level rise, Pacific Small Island Developing States are a bloc of States united by a shared resolve to tackle the climate crisis with boldness and with ambition.

Bainimarama adds the negotiations on market mechanisms must deliver robust rules and regulations that ensure environmental integrity, prevent double-counting, promote an overall mitigation of global emissions, and provide an avenue for more reliable resources to be used for rapid adaptation.

He says the Pacific is concerned that humanity is on the cusp of a terrifying scenario - the abandonment of science.

Meanwhile, Bainimarama also delivered a closing statement at a side-event session with the theme-Building The Climate Resilience Of The Urban Poor which was co-hosted by the Turkish Government and UN Habitat.

At the event, he said the current lack of climate resilience among our urban poor is not a Fijian problem but rather a global problem that requires global solutions.

He stresses as a global community, we have a commitment to leaving no citizen behind in our fight against climate change and this will be the ultimate test of that commitment.

The Prime Minister also delivered an intervention at the Ministerial Dialogue on Adaptation which was co-hosted by Spain and Chile.

He says there was a need to mainstream climate considerations across our planning and decision-making processes.

Bainimarama adds Fiji is also one of several countries to develop a National Adaptation Plan in line with the United Nations Framework Convention on Climate Change guidelines and has leveraged technical support from development partners to implement adaptation projects tailored to Fiji’s unique vulnerabilities, whether it is building seawalls, relocating communities, planting mangroves or boosting our agro-resilience.