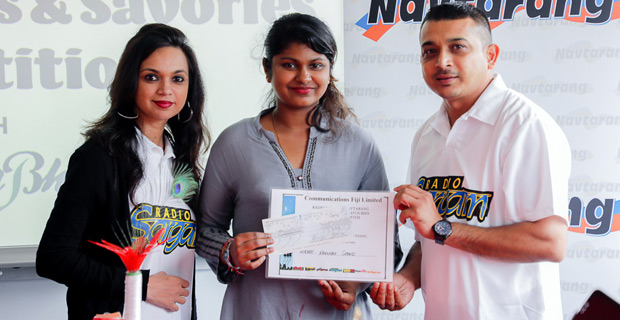 Khushbu Chand with Jai and Angeleen of Radio Sargam

The winner of Radio Sargam/Navtarang Diwali Sweet and Savouries competition sponsored by Bhika Bhai and Company Limited, Khushbu Chand says the essence of Diwali is unity and believes that the country should not only unite for Diwali on a single day but should remain united throughout the year.

19-year-old Chand who lives in Wainadoi, Navua says they will not be able to celebrate Diwali on a large scale because of a death in her family and feels Diwali is a day of prayers and also for meeting friends and family.

Chand has received $500 cash and Bhika Bhai has also promised to add one of Chand's sweets in their Diwali sweets box.

Chand and her mother, Sushil Mati made more than 20 sweets and savory dishes out of which eight were considered unique by the judges.

She says despite having her exams next week, she spent the week with her mother preparing for today.

The Wainadoi resident says she and mother spent three days to make the sweets and she feels happy winning the competition.

Chand also spent over a week preparing a Diwali greetings card made of rice, lentils, and spices.

Meanwhile, the first runner-up, 37-year-old Jaya Chandra of Nakasi won $300 while 19-year-old Pratish Shankar of Valelevu is the second runner up and got $200.

Four police officers charged with allegedly assaulting some suspects between 25th and 26th January 2018 during a drug raid operation in Tavua have ... 58 minutes ago

The debate on the Legal Practitioners Amendment Bill 2020 will take place this Thursday. Attorney General, Aiyaz Sayed-Khaiyum says the bill seeks ... 59 minutes ago