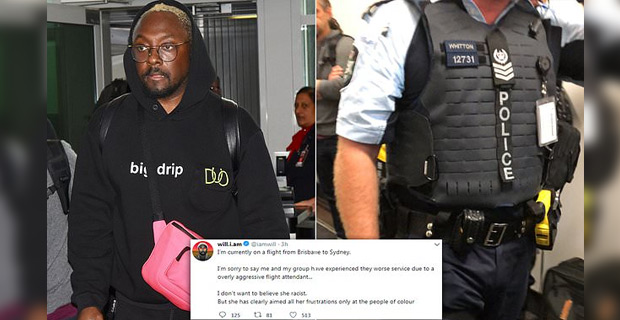 Black Eyed Peas frontman Will.i.am has accused a Qantas flight attendant of being "racist" and "beyond rude" to him during a flight from Brisbane to Sydney.

The Sydney Morning Herald reports the rapper was met by police at Sydney Airport yesterday after he clashed with the flight attendant, who he claims were "overly aggressive" to him because he couldn't hear her through his noise-canceling headphones.

This is how your greeted when you land from Brisbane to Sydney flying @qantas with a #RacistFlightattendant named Lorraine Marshall...She sent the police after me bacause I couldn’t hear the P.A while making beats on the plane wearing noise canceling headphones... pic.twitter.com/9xT7WqTUoO

In a series of tweets, the rapper used the hashtag #racistflightattendant, named the woman and shared an image of her and an Australian Federal Police officer.

The tweets have attracted some mixed reactions, with several people criticising his decision to publicly name the flight attendant on social media.

.@Qantas Your #RacistFlightattendant was beyond rude & took it to the next level by calling the police on me. thank god the other passengers testified that SHE was out of Control 🙏🏿 the police finally let me go. imagine if the police were as aggressive as Lorraine Marshall 😵

Qantas completely rejected the allegation that the incident had anything to do with race.

They say there was a misunderstanding on board, which seems to have been exacerbated by will.i.am wearing noise-canceling headphones and not being able to hear instructions from the crew.

They say they will be following up with will.i.am and wished him well for the rest of the tour.

The singer is in Australia with the Black Eyed Peas as part of the band's 2019/2020 world tour.

With SODELPA going through changes and opposition within the party, we give you all the stories that covered these ... 14 hours ago

The bail ruling for Sailosi Naivalurua who is accused of killing a man in Colo-i-Suva in April this year will be delivered by High Court Judge ... 14 hours ago
More News
TOP