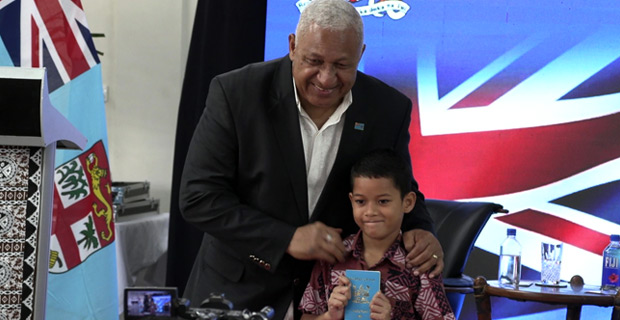 Prime Minister, Voreqe Bainimarama says they will be installing E-passport gates at International Airports once they reach critical mass with E-passport holders.

Speaking at the launch of the new E-passports today, Bainimarama says that they are also looking at having application centers at some of the Post Offices around the country.

The Prime Minister says that the new E-passports contain a new range of security features that will make it much more difficult for people to enter the country illegally.

He says that the new features will not mean it will take longer to produce because the previous supplier was producing around 120 passport books a day, however, the new supplier will produce the same amount in just an hour.

Bainimarama says that with the rollout of the new E-passports, Fiji has joined 54 other countries that have such technology in their passports.

Immigration Director, Nemani Vuniwaqa says that people who had lodged for E-passports prior to the launch today will not have to pay the new fee of $200.

He says that the new fee only applies to those who will lodge from today onwards.

The fees for new or renewal of standard E‑passports will be $200.