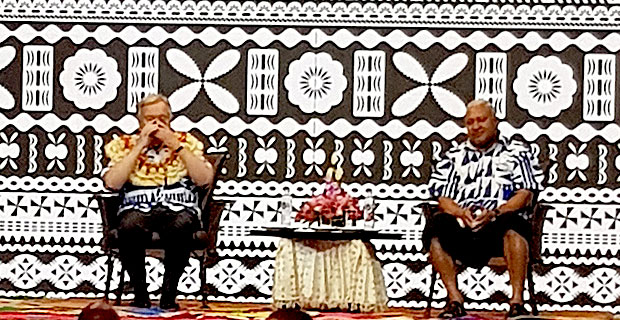 A traditional welcoming ceremony for the United Nations Secretary General, Antonio Guterres with the Prime Minister, Voreqe Bainimarama is currently underway at the Grand Pacific Hotel.

#UNSG @antonioguterres gets the taste of #Fijian kava during the traditional ceremony of welcome. Such a rich display of Fijian culture to the world! #UNSG #FijiNews #teamFiji #UN pic.twitter.com/gtfSENjmSx

Also present at the welcoming ceremony are members of Parliament and delegates of the Pacific Islands Forum.

Guterres who was  welcomed by the Minister for Defence, Inia Seruiratu, was accorded a 100 men guard of honour by members of the Republic of Fiji Military Forces upon arrival last night at the Nausori airport.

The historic visit will be the first to the Pacific by UN Secretary‑General Guterres.

#UNSG @antonioguterres is accorded a traditional ceremony of welcome by #Fijians in the presence of Pacific Island Leaders. Such traditions are deeply rooted in the Fijian way of life. Its our way of respecting our visitors and showcasing our genuine hospitality. #UN #FijiNews pic.twitter.com/qZkfdLuq2S

Tomorrow, Guterres will pay a courtesy call to President Jioji Konrote at Borron House and he will then be invited to a tree planting program.

A bilateral meeting will also be held between Guterres and Prime Minister, Voreqe Bainimarama at the Office of the Prime Minister before he addresses Parliament tomorrow.

The Head of the Catholic Church in Fiji Archbishop Peter Loy Chong says the church will be issuing a formal statement tomorrow in response to allegati... 58 minutes ago
LATEST NEWS

Three people who were involved in a car accident in Caubati, Nasinu this afternoon are undergoing medical treatment at the CWM Hospital. Two ... 45 minutes ago

Prime Minister Voreqe Bainimarama stresses that leadership lacks compassion in all sectors. Bainimarama highlighted this while speaking to the ... 49 minutes ago