We can't allow Fiji to fall into drugs - Qiliho

We can't allow Fiji to fall into drugs - Qiliho 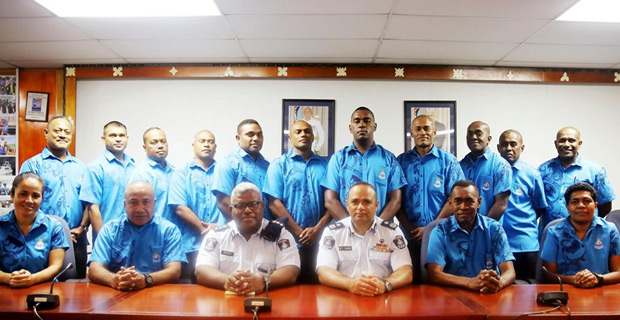 Qiliho was speaking to a delegation of fifteen Police Officers [Photo:Fiji Police Force]

The Commissioner of Police Sitiveni Qiliho says they can’t allow Fiji to fall into drugs and they are in a position to do something about it now.

Qiliho was speaking to a delegation of fifteen Police Officers who will be leaving tomorrow to attend a two-week anti-narcotics training in the People’s Republic of China’s top institutions.

He added the demand for, and the over production of drugs in South America has led to the increase in the movement of drugs through the Pacific.

He stated that he understands that they won’t be able to fully eradicate it, but they can however manage it and its impacts on our society and going to Yunnan Province is part of the battle.

He further states Australia and New Zealand have tightened their battle on their home front, as have we, and there is a likelihood that it will affect our neighbouring countries since  these drugs are being pushed through our oceans and a few kilos will be dropped off as payment, and then sold into our society to feed our users.

Qiliho says our counterparts from the Australian Federal Police have also attended training in Yunnan to help them fully understand the evolving nature of how criminals are trying to beat the system from moving the more solid form of the drugs in order to beat detection systems.

Qiliho says it is imperative that the officers to utilize the valuable learning opportunity well.

The delegation will be led by the Officer in Charge of the Fiji Police Drugs Unit ASP Anare Masitabua and comprises of officers from the Criminal Investigations Department, Crime Intel, Forensic and Prosecutions.

The Yunnan Police Public Security Bureau is the leading province in China dealing with Narcotics.

The Fiji Police Force has benefitted greatly since the signing of a Memorandum of Understanding in 2011 between the Fiji’s Ministry of Defense and National Security and China’s Ministry of Public Security.