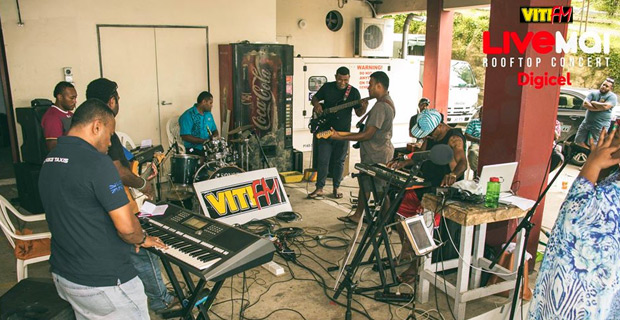 With just 3 days to go, Fiji’s first-ever VitiFM Digicel Live Mai Rooftop Concert is set to amaze the people of Fiji with the vast local talents that will take the stage this Saturday.

Sassy will be one of the artists taking the stage this Saturday during the VitiFM Live Mai Rooftop Concert sponsored by Digicel. Watch live on Viti FM Facebook page or listen live on our sister station Viti FM on 92FM, 92.2FM or 92.6FM around Fiji or listen live on our live radio stream on our website vitifm.com.fj. #VitiFM #LiveMaiRooftopConcert #Music #LocalMusic

One of the famous local singers that will be part of the concert, Sassy says she has done a few roof-top concerts around the region however this one will be special, as the songs she will be singing is written by her partner.

Sassy says there is so much untapped talent in Fiji and there is potential for artists to work together and share their gifts and experiences.

Tauvu Tribute will be one of the bands featuring in the VitiFM Live Mai Rooftop Concert sponsored by Digicel. Watch live on Viti FM Facebook page or listen live on our sister station Viti FM on 92FM, 92.2FM or 92.6FM around Fiji or listen live on our live radio stream on our website vitifm.com.fj. #VitiFM #LiveMaiRooftopConcert #Music #LocalMusic

VitiFM Content Director, Maikeli Radua says because this will be a rooftop concert, VitiFM can only allow a limited number of spectators to mingle with the artists, however, you can tune in to VitiFM on 92 FM, 92.2 FM or 92.6FM or watch it live on their Facebook page - VitiFM.

Only 15 lucky people that participated in the radio station's on-air competitions will be able to watch the concert live at the venue of the Roof Top concert which is 231 Waimanu Road, Suva.

The last 5 tickets for the concert will be given on Friday.

The Concert Program will kick start at 5pm this Saturday with Cagi Ni Delai Yatova set to take the stage at 5:04pm , Sassy will be performing at 5.41pm, Senilagakali Kei Koroilagi at 6.11pm, Etta Gonerogo will perform at 6.41pm, Leba Boi Yawa E Lomai Nasau at 7.21pm, The Vude Queen, Laisa Vulakoro will take the stage at 7.52pm, Tauvu Tribute at 8.23pm, Aggie Vakaloloma at 9.04pm and the last band to perform will be the Voqa Ni Delai Dokidoki at 9.34pm.

The Acting Permanent Secretary for Health, Doctor James Fong says the 66-year-old man who tested positive for COVID-19 after returning from India does... 17 minutes ago
LATEST NEWS

A Chinese fishing vessel which is alleged to have been carrying a dead crew member from May this year is stuck out at sea. An agent of the vessel ... 2 minutes ago