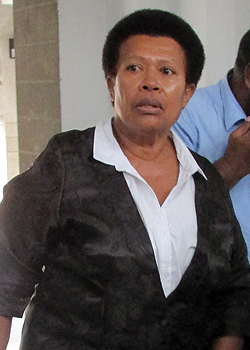 While delivering her maiden speech, Jilila Nalibu Kumar says she is ready and will do her work in the best way possible for the betterment of all communities and our nation.

Kumar says she decided to run in the elections as a Fiji First candidate because she supports the education and infrastructure developments which the government is doing in rural communities.

She also says joined the FijiFirst because it stands for equality.

Jilila Nalibu Kumar is originally from Raiwaqa village in Nadroga and is a mother of three.

Leawere says as he will focus on workers’ rights and interests.

More than 2,000 marijuana plants were uprooted from three farms in Kadavu this week. The first raid was conducted at Lavidi Village where more than... 56 minutes ago
LATEST NEWS

Prime Minister Voreqe Bainimarama says Fiji stands ready to serve its community of nations in every way it can, by way of peacekeeping and way of ... 1 hour ago

The Fiji Women's Crisis Centre has received 751 reports of violence against women and children for the first seven months of this year. It says ... 6 hours ago

The Emmy Awards are a celebration of televisions best and brightest, but 2020’s ceremony was marked by its focus on politics and social justice ... 7 hours ago

A 16-year-old girl is one of 18 people arrested from 11 o'clock last night to 4 o'clock this morning for allegedly breaching curfew restrictions. ... 8 hours ago
More News
TOP