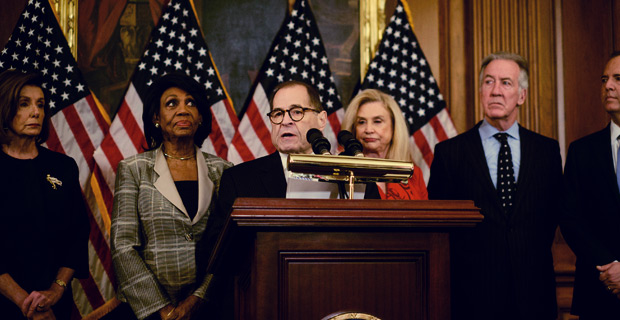 The Democratic-controlled US House Judiciary Committee has unveiled charges against US President Donald Trump, a key move in impeaching him.

The first article revealed by committee chief Jerry Nadler accuses Trump of abuse of power and the second accuses him of obstructing Congress.

BBC News reports the Republican president is said to have withheld aid to Ukraine for domestic political reasons.

Trump insists he has done "nothing wrong" and has dismissed the impeachment process as "madness".

If the House of Representatives Judiciary Committee votes to approve the articles later this week, they will then be submitted to the lower chamber for a full vote.

If, in turn, the articles are approved by the House - which is controlled by the Democrats - an impeachment trial in the Republican-held Senate will take place, possibly early in January.

Australia's second-largest city has begun a second lockdown in response to a spike in new coronavirus infections. Melbourne's five million ... 45 minutes ago

A man who drugged, abused, and raped a woman at a hotel in Nadi has been sentenced to 10 years imprisonment by High Court Judge Justice Chamath ... 58 minutes ago