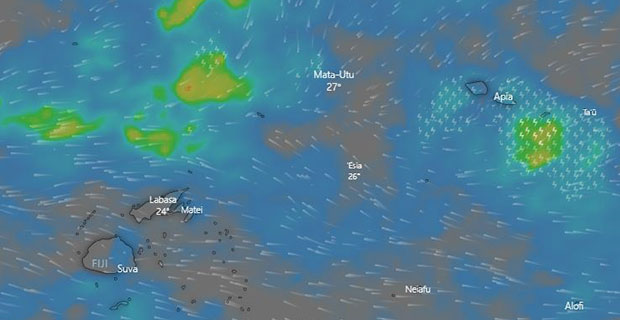 The Tropical Disturbance which is located approximately 1,670 kilometres to the far North West of Fiji, is expected to continue intensifying and become a Tropical Cyclone on Wednesday afternoon.

The Nadi Weather Office says once named, it will be called Tropical Cyclone Tino.

The system is anticipated to enter Fiji Waters on Friday.

As the system moves closer towards the group, the onset of destructive force winds is expected as early as Thursday night especially over the Yasawa and Mamanuca groups, Viti Levu, Vanua Levu, Taveuni and nearby smaller islands.

The Weather Office says coastal inundation from sea flooding may also be expected, both from the contribution of storm surge and wind-driven waves.

The potential for this system to develop into a tropical cyclone in the next 24 to 48 hours is low to moderate, becoming high thereafter.

Members of the public are advised to remain alert and vigilant.

Fiji’s seasoned diplomat and former Minister for Foreign Affairs, Ratu Inoke Kubuabola has been nominated as Fiji’s candidate for the position of ... 19 minutes ago