There is no BOOM in Fiji's Economy but a KABOOM - Rabuka

There is no BOOM in Fiji's Economy but a KABOOM - Rabuka 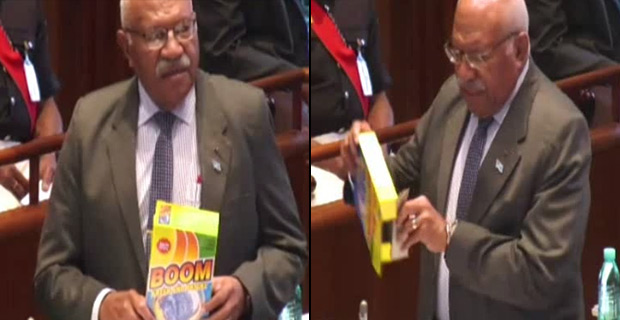 “If you talk about a boom in Fiji’s economy, there is nothing to justify it.”

Opposition Leader and SODELPA Leader, Sitiveni Rabuka said this while speaking on the 2019/2020 National Budget in Parliament this morning and he also showed an empty Boom detergent packet to the members of parliament.

Rabuka then turned the empty Boom detergent packet upside down and said that if people talk about a boom in Fiji, he is afraid there is nothing in it.

He says there is no boom in Fiji but a kaboom.

Rabuka also went on to attack the Minister for Economy, Aiyaz Sayed-Khaiyum saying he has no respect for the Parliament.

Rabuka says instead of trying to steer the ship in the right direction with vision and compassion to bring about unity, Sayed-Khaiyum spends most of the time ridiculing the Opposition, criticizing previous governments and boasting of the Bainimarama Government’s achievements.

Rabuka says the term “Fijian” is synonymous and associated with a number of basic traits and these traits include humility, respect for one another, cheerfulness, willingness to listen, accommodating, reciprocity, rugby, a life of sacrifice and service for peace and caring for one another.

Rabuka says many of his associates and members of the public have called him and shared the same sentiment, that Sayed-Khaiyum’s behavior in Parliament, is uncalled for.

We will have more later this afternoon.