There are no political prosecutions in Fiji - Pryde

There are no political prosecutions in Fiji - Pryde 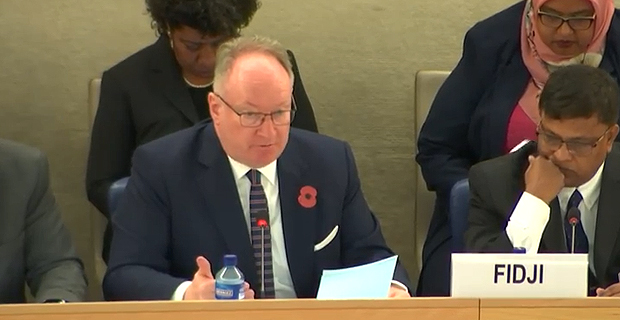 Director of Public Prosecutions Christopher Pryde says there are no political prosecutions in Fiji.

In his opening statement on the Universal Periodic Review of Fiji’s National Reports at the United Nations Human Rights Council, Pryde says it should be noted that no one person or organisation is targeted, it is the crime that is targeted not the individual or organisation.

He says whilst politicians or political leaders or trade unionists may find themselves investigated or charged with a criminal offence from time to time, they can be assured they are charged on the evidence objectively applied to the law and not due to their status or position in society.

Pryde also says although Fiji is becoming more tolerant of the rights of minorities, recent years have seen an increase in incidents of hate speech targeting vulnerable minority groups.

He adds Fiji has international obligations to protect vulnerable minority groups from hate speech attacks and one way it has done this, is by enforcing its sedition laws against perpetrators since hate speech is a particular form of sedition.

Pryde says decisions on prosecutions are made by the DPP independently of the government and according to a two-step process.

He says the police are responsible for the investigation of a criminal matter, but the prosecution of the matter resides with the DPP who makes the final decision on whether to prosecute a matter or not.

Pryde adds often this may mean the wishes of the victim are overridden, when it appears that traditional means of reconciliation and forgiveness are being used to justify a request to withdraw a charge and terminate a prosecution.

He further says that assault in a domestic context is not a reconcilable offence so any forgiveness sought, or traditional apology offered will not affect the charge and cannot be accepted by the court as a defence.

Pryde says in deciding whether a prosecution is in the public interest, the DPP is guided by its prosecution code.

He says the code sets out factors in favour or against prosecution.

He stresses where the offence involves violence or a child victim it will almost always be in the public interest to prosecute.

He also says when the offence involves a child victim processes are immediately put into place to ensure the child is supported throughout the criminal justice system.

The DPP says this year they published updated guidelines on prosecuting child sexual abuse cases in order to ensure that prosecutors deal with such cases in a manner that will ensure the best interests of the child are identified and met at every stage.

He says the reporting of acts of gender-based violence including domestic violence continues to increase which reflects the growing confidence that these matters will be taken seriously by the justice system but they recognize that there is a need for a more concerted effort to encourage all members of the community to feel more comfortable in reporting gender-based violence including those from the LGBT community.

The Head of the Catholic Church in Fiji Archbishop Peter Loy Chong says the church will be issuing a formal statement tomorrow in response to allegati... 3 minutes ago
LATEST NEWS