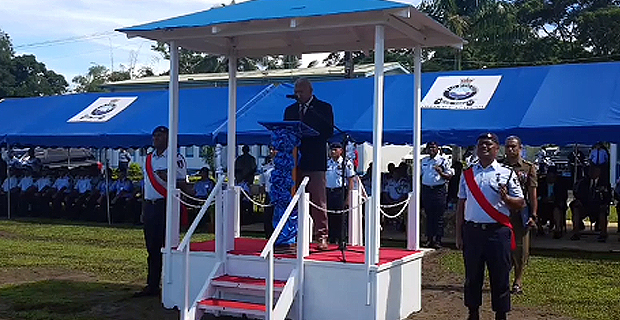 Prime Minister Voreqe Bainimarama says that it seems that every time we open the newspaper, log onto Facebook, or turn on the news, we are hit with stories of rape, violence and drug use.

While speaking at a Medal Presentation Ceremony at the Fiji Police Academy in Nasova, Bainimarama says the untold stories of the Fiji Police Force’s unspoken successes are not highlighted.

He says that the recent investments in the Force are signs that the government is committed to building a robust and modern Police Force.

Bainimarama says that they are building a Force that has every resource it needs to fight crime wherever it exists in an attempt to combat new criminal elements.

He says that none of these investments would matter, if it weren’t for the officers of this Force.

The Prime Minister has thanked all the medal recipients for their hard work and dedication to cultivating a law abiding society in Fiji.

Former Deputy Commissioner of Police Jimi Koroi say he was honored to be one of the medal recipients of the Long Service Medal.  Koroi says for the Force to recognize his years of service made him happy.

75-year-old Koroi says he was retired due to medical grounds. Another recipient of Long Service Medal Inspector Kelepi Bisi says he was blessed to have been one of the recipients.

He say a police officer needs to be a jack of all trades and to do this comes with challenges.