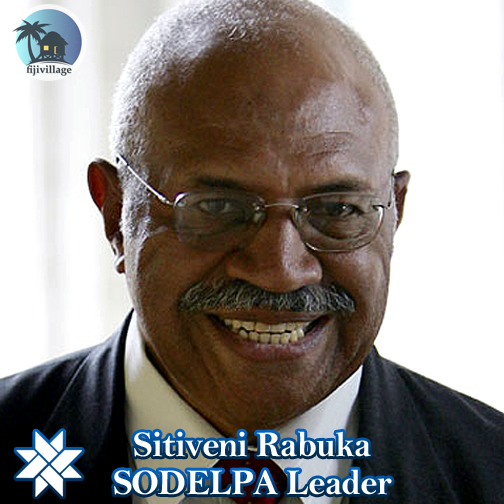 Sitiveni Rabuka has been chosen as the party leader for SODELPA.

Party President Ratu Naiqama Lalabalavu confirmed in the SODELPA General Assembly at the FTA Hall in Suva that Rabuka was chosen after interviews conducted with all the nominees by a panel chaired by former Prime Minister Laisenia Qarase.

The management board met for almost 2 hours this morning and a vote was taken after discussions.

Fijivillage has received confirmation that there were differences within SODELPA’s management board as some members including SODELPA’s Parliamentary Leader Ro Teimumu Kepa do not agree to the decision that Rabuka should be the SODELPA Leader.

This led to further discussions and the start of the SODELPA AGM was delayed by almost two hours.

Speaking to our News Director Vijay Narayan after the announcement, Ratu Naiqama confirmed that there were differences but that they managed to move ahead with Rabuka’s appointment.

Ratu Naiqama says some people did not agree with Rabuka because of his past.

Fijivillage also questioned Ratu Naiqama Lalabalavu if Ro Teimumu accepted the decision and we also asked him about Rabuka presenting a ‘matanigasau’ to the people present in the meeting.

Ro Teimumu said after the meeting that she has to support the democratic processes of the party although she may not agree to it personally.

She stresses that the people of Burebasaga will not support a coup leader.

Ro Teimumu will continue to be the Opposition Leader while Rabuka will now lead SODELPA’s preparations for the 2018 elections.

This change in SODELPA’s constitution was approved by the party’s General Assembly.

SODELPA is expected to call for 2018 elections candidates soon and the announcement of the candidates will be done in April 2017.

Queen Elizabeth II, the UK's longest-serving monarch, has died aged 96, after reigning for 70 years. 8 days ago

AG tables Electoral Amendment Bill in parliament to be debated and voted on without delay on Thursday /+ARTICLE-281411+ARTICLE/ AG attacks the ... 26 days ago
More In Depth

People’s Alliance Leader, Sitiveni Rabuka has raised the question on what use is a government that cannot ensure constant supply of water and electr... 4 hours ago
LATEST NEWS

Commissioner of Police, Brigadier General Sitiveni Qiliho has directed CID to investigate the matter where several allegations have been made of ... 4 hours ago

I have witnessed first hand the daily struggles of Fijians – Narube

I have witnessed first hand the daily struggles of the people in Namosi, Cakaudrove, Ra and Tailevu. This was stated by the former Governor of ... 4 hours ago

Birthday girl gets her biggest gift as she receives lifesaving surgery

Jessica Brown who will be turning one on Saturday received her biggest and most memorable first birthday gift as she received her gift of life from ... 4 hours ago

Vodafone Fiji is once again reminding social media users to be wary of scammers and fraudsters who prey on unsuspecting and gullible consumers into ... 5 hours ago

The Kings Highway between Wainivula Road and Cunningham Road will open at 4am tomorrow and work has not been affected by heavy rain in Suva this ... 5 hours ago
More News
TOP