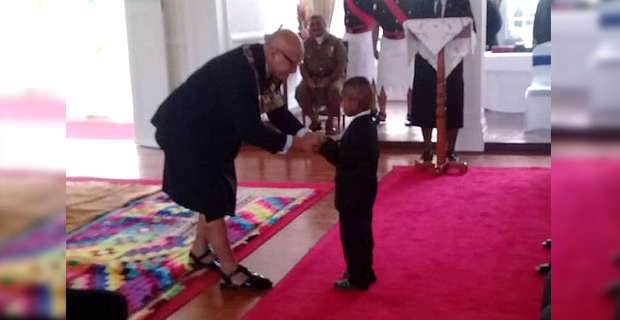 Several Fijians were awarded medals for their contribution to our country by President Jioji Konrote at the State House.

Five year old Aqoriniasi Dreu was awarded a bravery medal for saving his brother from drowning.

The Companion of the Order of Fiji medals were awarded to former Chief Justice Anthony Gates and former Governor of the Reserve Bank of Fiji, Barry Whiteside.

The Officer of the Order of Fiji of the Military Division medal was awarded to the Commissioner of Police, Sitiveni Qiliho and the Navy Captain John Fox.

The President says the awardees have every right to be given the award and has thanked their family for their support.

A minute of silence was also observed to honour the life of  late Dixon Seeto, President of the Fiji Islands Hotel and Tourism Association and of  Chinese Association of Fiji.

Prime Minister Voreqe Bainimarama says he will never accept the idea that even one family or one person is left behind in the modern ... 33 minutes ago

Minister for Commerce Trade, Tourism and Transport, Faiyaz Koya says he has been informed that the Maritime Safety Authority of Fiji has taken ... 36 minutes ago

FICAC has confirmed that investigations are continuing in the cases where eight Housing Authority of Fiji former employees were allegedly involved in ... 38 minutes ago