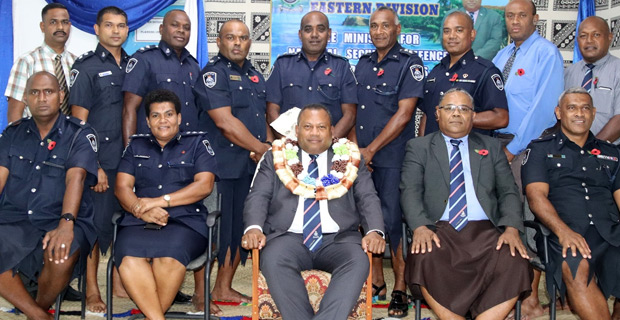 Minister for Defense and National Security Inia Seruiratu has urged Police officers that they must keep up with the changes taking place within their area of operation so that they are proactive rather than reactive.

While relaying the message to the Divisional Police Commander East, Senior Superintendent of Police Bereta Naisau and her Eastern Division Command Group, Seruiratu says he understands that they cannot fully get away from being reactive once crimes are committed, but they have to align their strategies according to the evolving crime trends, because development comes with a price and its innocent people who pay the price when they become victims of crime.

The Minister told the officers their roles as leaders are important in developing and inculcating a culture of service.

He adds customer service is practiced well in the private sector but is still a challenge for them and that is where capacity development is important.

The Minister says the force can have all the numbers, all the money, technology and resources, but if there are wrong people in it then they cannot achieve their tasks and that is why there is a need to invest in our people.

He says the government recognized the work put in by members of the institution in maintaining national security, but more needs to be done.

The Head of the Catholic Church in Fiji Archbishop Peter Loy Chong says the church will be issuing a formal statement tomorrow in response to allegati... 48 minutes ago
LATEST NEWS

Three people who were involved in a car accident in Caubati, Nasinu this afternoon are undergoing medical treatment at the CWM Hospital. Two ... 35 minutes ago

Prime Minister Voreqe Bainimarama stresses that leadership lacks compassion in all sectors. Bainimarama highlighted this while speaking to the ... 39 minutes ago