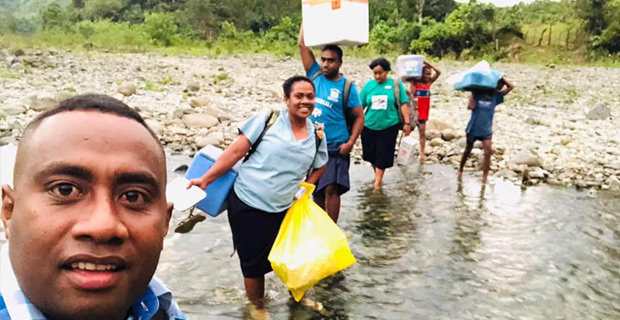 The Health Ministry says the Serua/Namosi Subdivisional Outbreak Response Team is at the forefront of the response to the measles outbreak since it was declared on the 7th of last month.

The Ministry says the team has been responding by rapidly isolating cases, quarantine and post-exposure vaccination for contacts or going door to door for mass vaccination of the at-risk communities.

It says the team has worked day and night and is sometimes trekking, camping, and crossing rivers on foot to reach people in some of the most remote communities.

Meanwhile, the batch of 200,000 measles vaccines has arrived in the country with the second phase of the immunisation campaign set to roll out from Wednesday.

The Ministry says that across Fiji, the immunisation campaign will target any child who has not received 2 doses of a measles vaccine, any child aged 12 and 18 months who is scheduled for their routine measles immunisation, any person in Fiji travelling overseas, all health care workers and all airport and hotel staff.

The confirmed number of measles cases still stands at 14.

The Ministry adds that pregnant women, babies under the age of 6 months, those with a compromised immune system and those with a known allergy to the vaccine should not be vaccinated.

Asco Foundation has donated $15,000 to the Foundation for the Education of Needy Children(FENC Fiji), to assist children impacted by TC Harold and ... 46 minutes ago