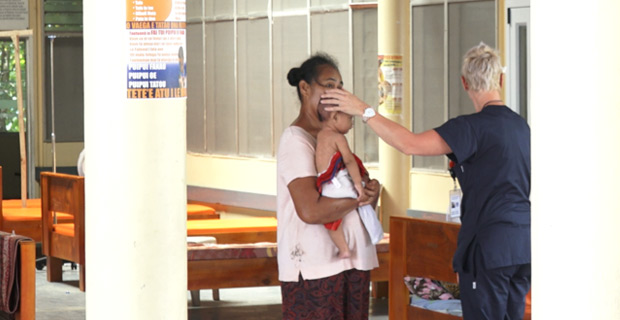 A baby who has measles at a clinic in Samoa. [Photo: RNZ]

The Samoan Government has allocated 2.5 million US dollars to help relief work around the measles epidemic.

Minister of Finance, Sili Epa Tuioti, says the money would be spent to meet several needs such as upgrading hospitals.

Radio NZ reports there have been at least 48 measles-related deaths since the outbreak last month, most of the dead being children under four years old.

The Prime Minister, Tuila'epa Sa'ilele Malielegaoi, stated that next month the government would table in Parliament a proposed legislation that would impose penalties against parents who ignored the compulsory vaccination order that had been ordered.

He says the Parliament would urgently discuss and pass the legislation in the coming weeks to make sure that it becomes law by January.

The Acting Permanent Secretary for Health, Doctor James Fong says the 66-year-old man who tested positive for COVID-19 after returning from India does... 50 minutes ago
LATEST NEWS

A Chinese fishing vessel which has been carrying a dead crew member from May this year is stuck out at sea. An agent of the vessel has told ... 35 minutes ago