Saltwater intrusion on farmland in Qilinimoto Settlement in Bua to be addressed - Dr. Reddy

Saltwater intrusion on farmland in Qilinimoto Settlement in Bua to be addressed - Dr. Reddy 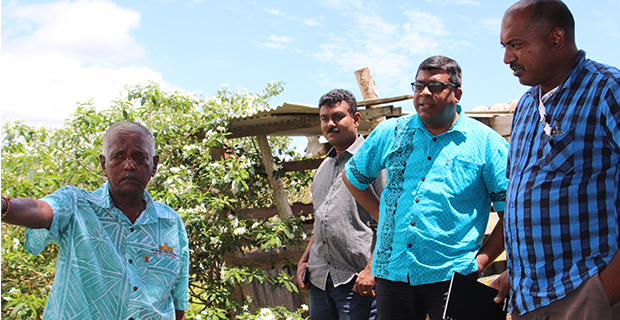 Saltwater intrusion on farmland in Qilinimoto Settlement in Bua will be addressed to ensure farming activities resume in affected areas.

This assurance comes from Acting Prime Minister and Agriculture Minister, Dr. Mahendra Reddy when the issue was raised by 58-year-old livestock farmer Moti Chand during a Talanoa Session with the Minister and farmers from Vatubogi, Nasuva, Coboi and Qilinimoto in Bua yesterday.

Chand says farming in his community had seen a downturn due to this, as tracts of once arable land had become inundated with seawater over time.

Dr. Reddy says this is due to climate change, as it has become a major contributor to the frequency of saltwater intrusion on farmlands.

He says a short term solution would be done by the Waterways and Environment Ministry as major maintenance works for the Vatubogi sea wall would be supplemented with compact soil filling, with drainage works to be made to prevent seawater from sipping onto farms.

Dr. Reddy also adds that riverbank erosion has become an increasing concern for farmers in Bua, with preventative measures also being assured to farmers as vast amounts of land had been washed away.

The Mobile Command Unit manned by the Police Special Response Unit has been relocated from Daya Street in Vatuwaqa to Veiraisi Settlement in ... 25 minutes ago

The defence lawyer for a man alleged to have murdered his wife has made an application in the Suva High Court to view the copy of the statement made ... 32 minutes ago