Rugby 7s captains ready for new era ahead of Dubai

Rugby 7s captains ready for new era ahead of Dubai 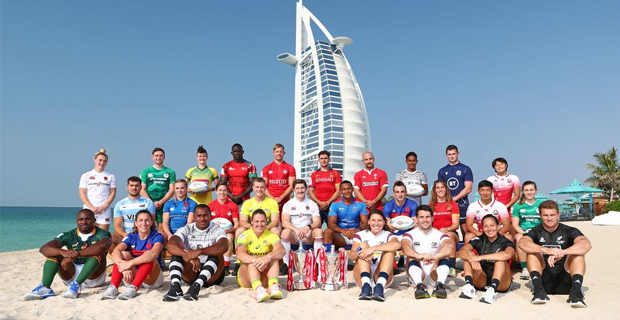 Today marks the dawn of a new era for rugby sevens as the captains competing in the first of a record six combined men’s and women’s events on the HSBC World Rugby Sevens Series 2020 came together in Dubai to officially launch the tournament.

WorldRugby.org reports celebrating its 50th anniversary this year, the Emirates Airline Dubai Rugby Sevens will bring together 28 teams from across the globe for three days of non-stop rugby sevens.

Dubai kicks off the men’s competition for the 2020 series and is the second tournament for the women after their season opener in Glendale, Colorado, in October where the hosts the USA were victorious.

As well as 2020 being a record-breaker for the world series with the number of women’s tournaments increasing to eight and the men’s again being contested across 10, it is also an Olympic season with the Tokyo 2020 Olympic Games taking place next July.

Rugby sevens will be represented at the Games for a second time at the Tokyo Stadium from 27 July-1 August.

Eleven men’s and 10 women’s teams have qualified for Tokyo 2020 so far with last season’s world series acting as the principal route for qualification with the top four teams in the men’s and women’s competitions automatically qualifying.

Only three places remain to be confirmed – one men’s and two women’s – with the global repechage tournament in June next year determining which teams will occupy the final spots.

The Fiji Airways Men’s National 7s team take on Japan at 4.02am this Friday in their first pool match of the Dubai 7s.

Fiji will take on Argentina in their second pool match at 10.04pm on Friday and they will face France in their last match at 4.02am on Saturday.

The Acting Permanent Secretary for Health, Doctor James Fong says the 66-year-old man who tested positive for COVID-19 after returning from India does... 55 minutes ago
LATEST NEWS

A Chinese fishing vessel which has been carrying a dead crew member from May this year is stuck out at sea. An agent of the vessel has told ... 40 minutes ago