Recommendations from “Substance Abuse – Let’s Talk About It! Finding a Fijian Solution!

Recommendations from “Substance Abuse – Let’s Talk About It! Finding a Fijian Solution! 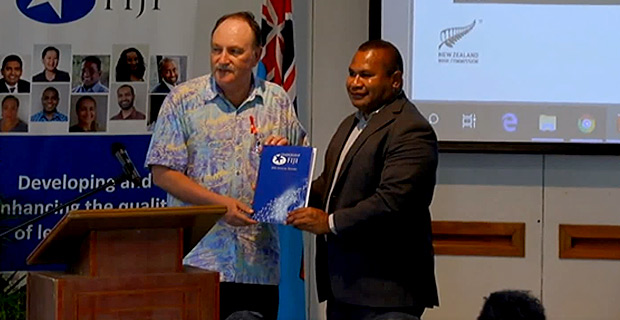 Recommendations from the National Dialogue titled “Substance Abuse – Let’s Talk About It! Finding a Fijian Solution! has been handed over to the Deputy Secretary for Defence, Ilai Moceica.

This was organised by Leadership Fiji with the support of the Ministry of Defence and National Security.

While handing over the recommendations, Leadership Fiji Chairman William Parkinson says these recommendations includes the need to invest in comprehensive research in a survey to gather data in order to understand and identify the issues surrounding substance abuse in Fiji.

Parkinson says another recommendation is for the National Substance Abuse Council to put together a standard inclusive strategic information kit for communities to use to create awareness.

He says these kits should outline the physical and mental scars of substance abuse.

Parkinson says recommendations also include the recognition of the need to build rehabilitation centres.

He says they also recommend that the law focus on drug addiction as a health issue rather than as a criminal act.

Parkinson says they have also recommended that Crime Prevention Committees be established in crime hotspots to assist the police.

Deputy Secretary for Defence, Ilai Moceica has made a commitment that the issues will be looked at and will be socialised with the Permanent Secretaries of the different ministries.

He says after this, proposed laws in the forms of bills will be looked at as early as next week when parliament sits.

Moceica has thanked Leadership Fiji for this initiative.

A 37-year-old man who is alleged to have raped, assaulted and robbed a 58-year-old woman in a settlement in Suva has pleaded not guilty to all his ... 56 minutes ago