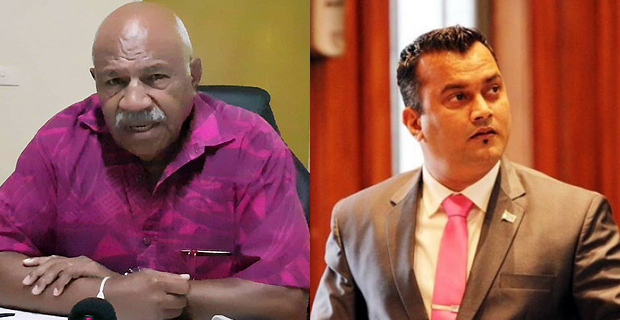 Leader of Opposition and SODELPA Parliamentary Leader Sitiveni Rabuka stresses that the Chairman of the Parliamentary Standing Committee on Justice, Law and Human Rights, Alvick Maharaj should communicate with him directly rather than making a public call for SODELPA MP, Mosese Bulitavu to step down from the committee.

Maharaj says it is very disturbing for him as Chairperson of the standing committee as Bulitavu is a member of the committee. He says Bulitavu should do the honorable thing of stepping down from the committee as his post on social media was totally against the principles of human rights.

Maharaj says the committee is currently in the process of scrutinizing the Registration of Sex Offenders Bill, which is basically about safeguarding our mothers and sisters.

The Assistant Minister for Employment says while on one side the parliamentary committee is working on a domestic bill to protect the right of Fijian women regardless of ethnicity, a member publically pointing fingers on Fijian women of Indian descent to be having affairs and using the ‘bulubulu’ custom to reconcile a rape or extra marital affair cases in the iTaukei community is not acceptable nor it should be tolerated.

Alvick Maharaj says he has known Bulitavu since high school and he was not like this. Maharaj says he believes its SODELPA’s ethnic profiling and policies which has polluted Bulitavu’s mind.

He says he is seriously concerned about how many other young Fijian minds have been polluted by such policies of SODELPA, and have such cheap thinking with regards to Fijian women.

Maharaj says it is a very sad day for the for the Parliamentary Committee on Justice, Law and Human Rights that one of the members has such a cheap thinking with regards to females in Fiji.

When questioned on whether Bulitavu will be asked to step down, Sitiveni Rabuka says Maharaj should contact him as SODELPA appointed Bulitavu to the committee.

We are currently trying to speak to SODELPA President, Ro Filipe Tuisawau.