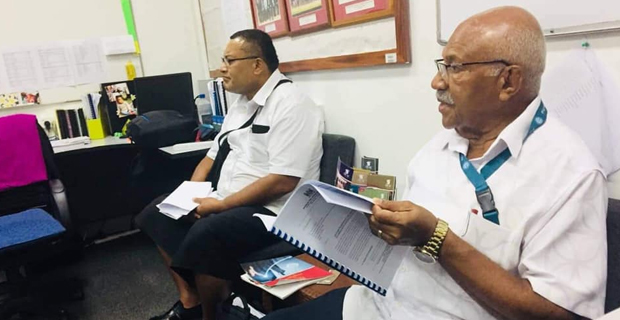 Opposition and SODELPA Leader, Sitiveni Rabuka has lodged a complaint with FICAC regarding the 2010 Rewa Dairy Restructure Consultancy contract award without tender.

Rabuka says he has asked FICAC to investigate various offences which may have been allegedly committed.

He says he is urging FICAC to do its duty without fear or favour adding he has also asked FICAC to formally respond to him with a report of their investigation.

Rabuka’s complaint is regarding the failure to comply with Government financial procurement procedures laid out in the 2005 Finance Instructions issued by the then Finance Minister following the enactment of the Financial Management Act 2004.

He says the Court of Appeal and High Court judgment in Aliz Pacific vs. Attorney General confirm that on 27th April 2010, Cabinet decided to award the Rewa Dairy Restructure consultancy contract to Aliz Pacific.

Rabuka says, however the 2005 Finance Instructions require a competitive public tender for all expenditure over $50,001 and this was not done.

Meanwhile, the Fiji Court of Appeal had dismissed an appeal by Aliz Pacific Chartered Accountants and Doctor Nur Bano Ali against the Auditor General and the Attorney General in November last year.

Orders were also made by the Fiji Court of Appeal for Aliz Pacific and Doctor Ali to pay the Auditor General $5,000 as costs.

In its judgment , the Fiji Court of Appeal had said Justice Hamza rightly dismissed the action by Aliz Pacific and Doctor Ali.