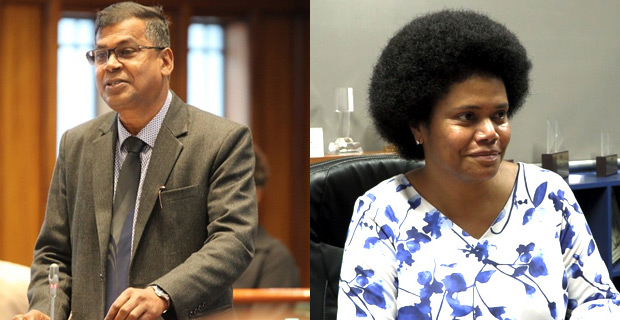 National Federation Party Leader, Professor Biman Prasad says it is not appropriate to curse anyone.

He made these comments as NFP MP, Lenora Qereqeretabua wrote on facebook and attacked FijiFirst MPs by using the word curse. The post has since been edited and modified. Professor Prasad says that it is not something that he would condone or the Party condones.

Professor Prasad says that he was notified about the post yesterday.

Prasad says to Qereqeretabua's credit, she realized that is not what she should have written and took it out of the post.

When questioned by Fijivillage if he will talk to Qereqeretabua about the post, Professor Prasad says Qereqeretabua herself realized that she should not have used the word and she took it out and that is where they leave the matter.

Qereqeretabua had written on facebook ‘ that the person who shot the video of the Prime Minister of Fiji physically assaulting a member of the Opposition was yesterday told to tender his resignation. He worked for the Parliament of Fiji’

She wrote ‘ FijiFirst MPs you have deprived an honest man his livelihood because he chose Right and Justice. He is the sole breadwinner of his family supporting his mother. But your dictatorial leaders said he should suffer for his honesty’.

She wrote, ‘may you; Alex, Mereseini, Inia, Semi, Selai, Ashneel, Jone, Alipate, Osea, Voreqe, Rohit, Mahen , Praveen, Veena, Alvick, Rosy, Aiyaz, Ifereimi and all in your cohort and your descendants forever be cursed for your choices’.

When we contacted Qereqeretabua about the post, she said that her party leader, Professor Biman Prasad has commented on it.

We have also sent questions to the Attorney General, Aiyaz Sayed‑Khaiyum.