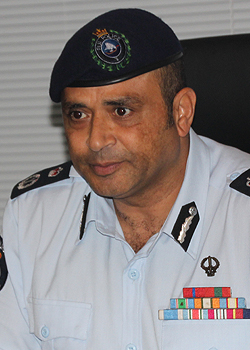 Police Commissioner Sitiveni Qiliho says investigations into the death of the 19-year-old in custody at the Nakasi Police Station must be allowed to take its course.

Qiliho has directed his Director Internal Affairs and Director CID and DPC East to ensure the investigation is done promptly.

He says there is a lot of speculation about this case from social media and other forums however it is wise that they allow the investigation to be conducted before making further comments.

Qiliho says a post mortem has to be done to determine the cause of death, otherwise the investigation will not be completed.

He says the post mortem has to be done according to law, and they have been in touch with the family after they had obtained legal advice.

Meanwhile, the mother of the 19-year-old man told us yesterday that they are refusing to allow Police to go ahead with the post mortem examination.

She told us that she wants answers from the Police on how they established that her son committed suicide as she claims that she has been given different stories by different officers at Nakasi Police Station.

Suva Grammar School leads the medal tally in the Boys Division at the Coca Cola Games with 5 gold, 1 silver and 5 bronze after day 2 of competition. ... 15 hours ago
LATEST NEWS

Jone Vosabalavu of Queen Victoria School has broken the Senior Boys Javelin record at the 2022 Coca Cola Games. Vosabalavu threw a distance of ... 13 hours ago

Viliame Qerewaqa of Holy Cross College in Taveuni has won gold in the Coca-Cola Games Intermediate Boys Long Jump with a jump of 6.67 metres. Pita ... 14 hours ago

Lavenia Kovanalagi has secured the first gold medal for Vishnu Deo Memorial School in the Senior Girls Discus with a throw of 36.15 metres. Tamara ... 14 hours ago

Suva Grammar School’s Frances Peters has claimed the gold medal in the Intermediate Boys Shot Put with a throw of 14.75 metres. Atunaisa ... 14 hours ago