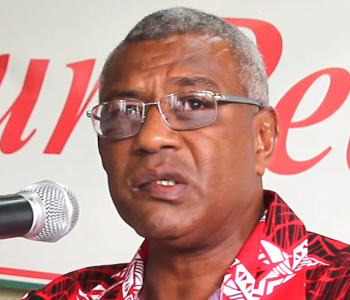 Former FijiFirst Minister, Pio Tikoduadua has just been announced as the new President of the National Federation Party.

The announcement was made in party’s AGM and Annual Convention in Lautoka in the last hour.

While addressing party supporters, Tikoduadua stated that the Indo Fijian community should no longer be duped in believing that their security is only guaranteed by a Bainimarama that is in power.

He says the actions of the i-Taukei in the history must no longer be used as an excuse to building an environment that will deter them from expressing their rights under 2013 constitution.

Tikoduadua then said that it is now almost 20 years since 2000 and the same excuses to suppressing the i-Taukei interests cannot be used to protect the rights of the Indo Fijians.

NFP’s new President then said that there are close to 300 people in the Convention from Wainibuka in Tailevu who were once branded as rebels in 2000.

Tikoduadua says they are law-abiding people who believe in the power of democracy and the democratic process.

Around 1,100 people are present at NFP’s Annual Convention at the Girmit Centre in Lautoka.

We will have more this afternoon.