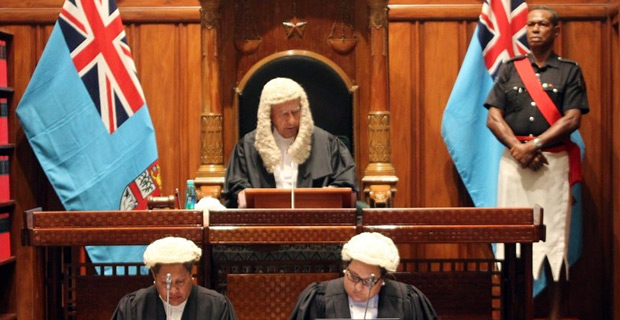 [Photo: Parliament of the Republic of Fiji]

Parliament has approved the sitting dates for next year despite reservations from the opposition.

While moving the motion, the Leader of Government in Parliament and the Minister for Defence and National Security Inia Seruiratu says budget dates will be confirmed in due course and is expected to be in June or July.

Seruiratu says the motion does not propose a reduction in sittings in comparison to this year’s sitting calendar.

He says people may view this as limiting debates on questions and motions, limiting people’s access to members of parliament, limiting accountability to the people of Fiji, on the contrary, it does not take away the role of the parliament which is to make and pass laws.

He says it does not take away the role of the members of parliament which is to represent the Fijian people.

Leader of Opposition, Sitiveni Rabuka says the business committee has agreed with the sitting dates but it is done on a vote basis.

Rabuka says they still express their reservations on the number of days that are allocated for them to debate national matters adding he believes that more time should be given for their deliberations on the various important bills in front of them.

SODELPA President and MP, Ro Filipe Tuisawau say they acknowledge that some of their requests have been approved however they are concerned with the reduced sittings.

The Attorney General and Minister for Economy, Aiyaz Sayed-Khaiyum says that parliament sitting dates is not the only means where people’s views are represented, as they also have committees.

SODELPA MP, Viliame Gavoka says that he had asked the government to follow the example of SDL and SVT where they have a legislative committee which was tasked to bring two bills in every parliament sitting.

Sayed-Khaiyum says that Gavoka is misleading parliament when he says that the previous government used to have a bill every time they sat.

Meanwhile Opposition Whip, Lynda Tabuya says that more time is needed to debate on the bills that are before the house, and government needs to share the work of the Standing Committees.

The Attorney General says that the government has many matters to attend to.

A 37-year-old man who is alleged to have raped, assaulted and robbed a 58-year-old woman in a settlement in Suva has pleaded not guilty to all his ... 26 minutes ago

A 36-year-old man from Samabula who was allegedly found with two bags of methamphetamine and five bullets of marijuana has been remanded in custody ... 30 minutes ago

Former Lawyer Shazran Abdul Lateef and Zoe Maharaj Moore who are charged with drug-related offences will take their plea on the 22nd of this ... 33 minutes ago

Police and the Land Transport Authority of Fiji are searching for a suspect of a hit and run incident which caused the death of a man in Saweni, ... 39 minutes ago