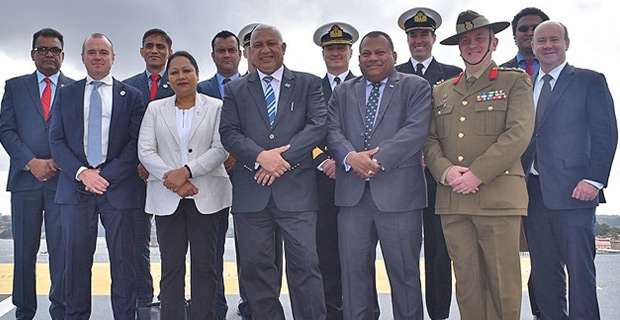 Prime Minister, Voreqe Bainimarama has thanked the Australian Defence Forces on board HMAS Adelaide for especially assisting Fijians in the aftermath cyclones and natural disasters.

He says the last time he was on board the ship was in 2016 when has was thanking the troops for assisting Fiji in the aftermath of Tropical Cyclone.

He also thanked the troops for the relationship they have had in the past decade though the Vuvale Partnership.

Bainimarama adds he is looking forward to welcoming the HMAS Adelaide in November.

Meanwhile, the Prime Minister  his delegation were hosted to a dinner by the Australian Prime Minister Scott Morrison at his official residence in Canberra last night.

The two leaders also took the opportunity to exchange gifts and toasted to a lasting friendship.

Bainimarama says he is looking forward to building a stronger relationship between the nations that endures for generations and forging a bond of family worthy of the history, values and natural affinity shared by their people.