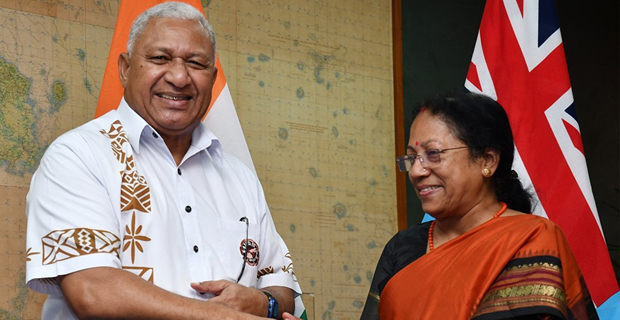 Prime Minister Voreqe Bainimarama has put forth a proposal for the High Commission of India to work closely with the Ministry of Education to update the notes on yoga exercises which have been circulated to schools by the ministry since 2016.

He put the proposal to the Indian High Commissioner to Fiji, Padmaja, when they met on Tuesday.

Bainimarama says every Fijian knows someone who is affected by NCDs or has lost someone they love to one of these deadly diseases.

Bainimarama says for all of us this is a personal issue and we all need to commit to building a healthier Fijian society by encouraging healthier living among our people.

He says physical exercise is one critical pro‑active strategy to prevent a further rise in NCDs, and Bainimarama believes that yoga, as well as other forms of exercise, should be practised more widely throughout the country including in our schools.

He added as as the birthplace of the practice of yoga itself ‑ India has a lot to share with Fiji in encouraging more Fijians to practise this physical discipline.

The results for all 24 players that were tested for marijuana, methamphetamine and cocaine use during yesterday’s group matches at the Punjas ... 10 minutes ago