PM and his delegation tour the HMAS Adelaide

PM and his delegation tour the HMAS Adelaide 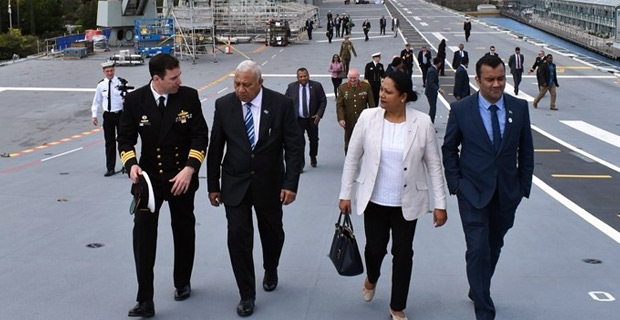 The delegation also met some of the members of the Australian Defence Forces [Photo:Fijian Government]

The Prime Minister and his delegation were given a tour of the world‑class naval ship and was briefed on its daily operations, among other things.

Bainimarama thanked the Australian Defence Force for its unwavering support and continued collaboration towards the RFMF in the area of technical assistance, learning exchanges and many more.

Bainimarama says the RFMF was also ready to reciprocate the goodwill to Australia and to continue the good relationship that the two defence forces share.

The delegation also met some of the members of the Australian Defence Forces who worked with the RFMF on peacekeeping operations.