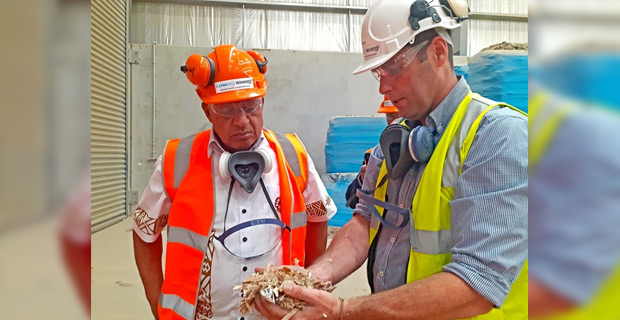 Prime Minister, Voreqe Bainimarama and his delegation received a warm welcome upon arriving for his first official state visit to Sydney, Australia.

The Head of the Office of the Pacific in the Department of Foreign Affairs and Trade, Ewen McDonald and Australian High Commissioner to Fiji, John Feakes officially received Bainimarama and his delegation.

The delegation later visited the Clean Away Resource Recovery Facility where Bainimarama was briefed on the waste manufacturing processes and sustainable development practices of the facility.

The Prime Minister is expected to visit the Sydney Desalination Plant later today. The plant is rated as one of the high‑quality drinking water suppliers in Sydney, producing an average of 250 million litres per day of drinking water for up to 1.5 million people.

The visit is also part of the Fijian Government’s initiative of providing clean and safe drinking water to all Fijians.

The government says it aims to allocate resources for sustained maintenance and construction of new water treatment plants, reservoirs and reticulation systems, rural water schemes, development of groundwater sources, setting up of desalination plants in the maritime region, and distribution of water tanks in rural areas.

It also says that innovative technologies will be adopted for industrial recycling, rainwater harvesting and storage, storm water and aquifer management and use of renewable energy for desalination plants.

The delegation will also visit the Downer’s Western Sydney Waste Processing Facilities with the aim of exchanging innovative ideas on creating economic, social and environmental value for waste products.

The delegation will also meet the Fijian community in Sydney.