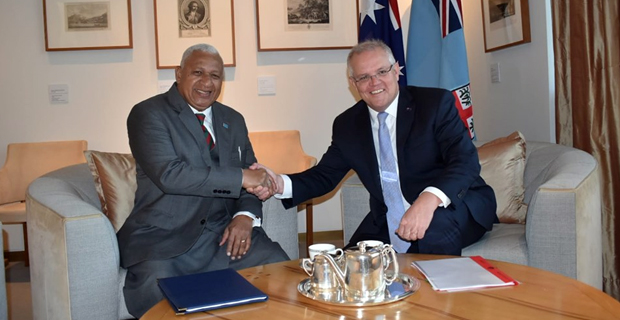 The partnership which was announced by the Australian Prime Minister during his visit to Fiji earlier this year will see enhanced cooperation in multiple areas of mutual interest between the two neighbors.

Bainimarama says he is looking forward to advancing the era of respect and openness that has, and must continue, to define the engagement between their governments.

He says, they have already had the chance to speak one‑on‑one and talk through some pressing issues ahead of this official bilateral meeting.

He adds members of any family are entitled to their disagreement and no one expects that their differences can be resolved quickly or easily but they must never falter in forging common grounds during their discussion on the issues that impact Fijian, Australian and all the Pacific people.

Bainimarama also says he is looking forward to reciprocating the welcome when the Australian Prime Minister comes to Fiji in October.

Australian Prime Minister, Scott Morrison says he loves the way Bainimarama has described their relationship as a Vuvale Partnership.

He says it is a term of intimacy, family and that is what has always been the basis of the relationship between the two countries.

He says the people-to-people relationship, strategic relationship and the economic partnership are not new and go back many, many generations.